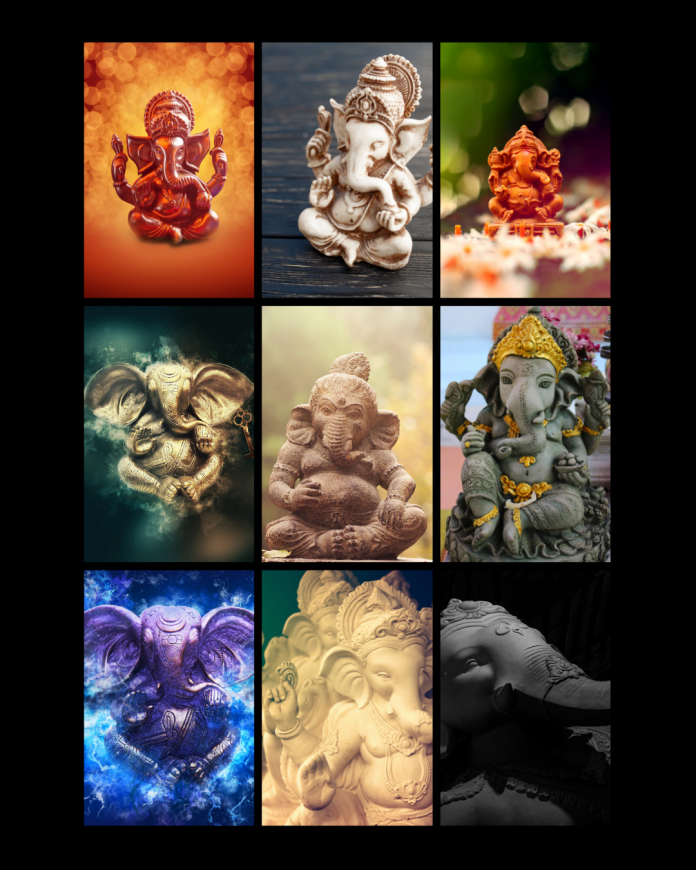 Hinduism is the world’s oldest surviving religion. The concepts, rituals, pilgrimage sites, cosmological systems, and knowledge of Hinduism have helped this faith survive and thrive despite numerous invasions and disasters. Vedic yajna, yoga, and Ayurveda have saved innumerable people. The knowledge of Dharma is being practiced and adapted globally.

Almost all the eastern religions have their roots in Hinduism, so you see the adaptation of Hindu gods, including Ganesha, everywhere. From sculptures of Bhagwan Ganesha in Persia, Central America, Iran, China, Afghanistan, Thailand, Japan, and Cambodia, Hindu Ganesha’s wide footprint can be observed tracing back to 2000 years ago.

In this article, we will explore the Significance of Bhagwan Ganesha in world regions and religions. We will specifically see how Ganesha is worshipped in other nations.

Ganesha in Shingon Buddhism in Japan

Shingon Buddhism is the primary school of Buddhism in Japan and one of the few existing Vajrayana lineages in East Asia, initially spread from India to China through traveling monks such as Amoghavajra and Vajrabodhi. Predictably, Ganesha worship was carried to Japan by Ancient Buddhists via China. Also known as the Deva of bliss, Ganesha (Called Kangiten in Japan) is invoked for worldly gains and enlightenment. He is offered sweet confections called “Kangidan,” which is similar to ‘Modak’ offered in India. In Japan, Ganesha is also worshiped as the god of love by many young girls and boys who are trying to succeed in their courtship.

Ganesha in Mayan Religion in Mexico

Mexico? Yes, Mexico, the same Mexico, which borders the United States. The air distance between India and Mexico is 15,813 km, but many, many, many years ago, a god was worshiped in this place with an uncanny resemblance to Ganesha. There were numerous pre-Columbian towns and temples constructed by the Mayans of the Terminal Classic period. Mayans’ temples’ architecture was very similar to that of Hindus as virtually all of them are built using a pyramidal design and taper towards the top. This is considerably visible and is one of the first things that anyone will see upon looking at pictures or visiting the ruins in reality. However, the similarities don’t end right there. Mayans worshipped someone with sparkling similarities to Ganesha for the same reason as what Hindus did. Mayans had a god of good luck, prosperities, and intellectuals with the same Ganesha elephant head and the same number of hands as Ganesha. Some tribes, mainly from the southern and south-central regions of Mexico, still worship the same god. Manuscripts and excavations from Central and North America prove, in my opinion, without a doubt – Bhagwan Ganesha was worshipped in the pre-Colombian culture, and the surviving natives still revere him. This is again just my opinion after noticing the similarities.

In Thailand, Ganesha is called Phra Phikanet and is revered as the deity of success and fortune and the remover of permanent obstacles. The practice of worshipping Ganesha in Thailand dates from over 1500 years. There are lovely shrines dedicated to Ganesha across Thailand. One of the most revered shrines is the Brahmin Temple in central Bangkok by the Giant Swing, where you can find some of the oldest images of Ganesha. Ganesha is associated with education, arts, and trade, and so, he appears in the Department of Fine Arts emblem in Thailand. He is honored with Sweers, Motaka, and fruit when business is good, and his picture is put upside down when business is down. As god of diplomacy and business, he sits on a high column outside Bangkok’s World Trade Center, where people offer incense, flowers, and a reverential Sawasdee.

It is safe to say that Ganesha is Indonesia’s favorite god. Hinduism reached the Indonesian Archipelago as early as the first century, or even before that. So that puts Hinduism to be at least 2000-years-old in Indonesia. Hinduism is followed by most of the Indonesian population in Bali, Java, and Sumatra, and the ‘Indonesian God of Wisdom,’ Ganesha, is adored by all. There is even a Ganesha statue from 1 CE, which was discovered on the top of Mount Raksa in Panaitan Island in West Java, confirming Ganesha Worshippers’ presence in the region for over 2000-years. Ganesha is found in every Shiva Temple throughout the islands. You can see Ganesha in the Historic Prambanan Hindu temple in Yogyakarta, Indonesia.