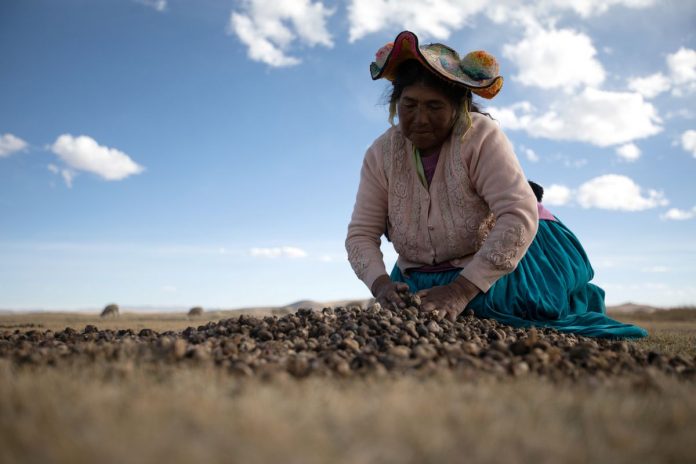 Maxima Ccalla, 60, an indigenous Quechua woman, has spent her life tilling the harsh soil in Peru’s Andean highlands, resigned to a fate far removed from the vast riches buried deep beneath her feet in seams of copper, zinc and gold.

The Andean communities in Ccalla’s home region of Puno and beyond have long clashed with the mining companies that dig mineral wealth out from the ground.

In recent interviews, many said they felt discriminated against and marginalized, and accused mining companies of polluting their water and soil.

But in a country still under the shadow of a colonial past, the rise of an outsider politician, the son of peasant farmers, is sparking hopes of change. It has also thrown a spotlight on stark divides between the rural Andean highlands and remote Amazon settlements, and the wealthier – and whiter – coastal cities.

Pedro Castillo, who wears a straw farmers hat and plays up his humble village roots, has pledged to give a voice to Peru’s “forgotten” rural groups and redistribute mineral wealth in the world’s second largest producer of copper.

The socially conservative leftist is on the cusp of being confirmed president after firing up the rural and indigenous vote, including in mineral-rich regions like Puno.

“So long, governments have promised to solve our problems but nothing has changed,” Ccalla said in Quechua through a translator while working in the fields surrounding her home in the community of Carata.

“Now, hopefully, he will fulfill his promises.”

Ccalla is one of millions of mostly poor, rural Peruvians who voted for Castillo in the June 6 run-off election.

Castillo holds a slim lead, which is being scrutinized after legal pressure from his right-wing rival Keiko Fujimori who has alleged fraud and wants to disqualify some votes from rural areas.

Election observers said the vote was carried out cleanly.

The tension over the count has exposed a racial and socio-economic divide in the country.

More than a dozen leaders and activists from Quechua and Aymara communities, scattered across the Andes, and others deep in the Amazon rainforest hundreds of miles north, spoke to Reuters candidly about the discrimination they face.

In Puno, the region where Carata is located, Castillo scored some 90% of the total vote count. His party logo, a yellow pencil on red background, had been painted on walls of lone houses – the only splashes of bright color for miles around.

Though Castillo does not identify as a member of an indigenous community, those who spoke to Reuters overwhelmingly said they could relate to him “as one of us” because of his humble upbringing and his background as a farmer.

As with Bolivia’s Evo Morales a decade ago, they hoped he would give greater representation to marginalized groups, and a more state-led approach to mining to drive higher social spending.

“Now we see a lot of possibilities for the future – he’ll be a good president,” said Rene Belizario, 34, a Quechua. But, he added, “this is our opportunity and if he doesn’t deliver, the people will rise. There’ll be protests.”

Belizario, a father of three young boys, said he hoped Castillo would “recover” mines in the area operated by private companies to redistribute profits and generate jobs.

Mining is a key driver of Peru’s economy. Metals are the country’s largest export and Castillo, even with his plans to shake things up, will need to negotiate his way forward.

And what farming-based indigenous communities want in development terms rarely tallies with the ideas of the government in distant Lima, said Vito Calderon, an Aymara who took part in a 2011 protest against a mining project.

‘OUR LAND HAS BEEN STOLEN’

Alejandro Toledo, a Quechua who was president in the early 2000s, had sparked hopes among Andean groups that he would give them more profile, though left them largely disappointed.

Indigenous leaders told Reuters that they had decided to support Castillo after he met with them to hear their demands and pledged to protect indigenous lands and push for a new constitution.

Melania Camales, who represents indigenous women in the Amazon, is among those who met him. She has hopes for him as president, but knows it won’t be easy.

“For decades, our land has been stolen by private companies, concessioned by the government,” she said. Some 200 years of “colonialist, racist, classist and male chauvinist education” will be difficult to undo, she added.

“We know he could betray us and power could go to his head. But the last thing we as indigenous communities should lose is hope.”

Long feeling discriminated against because of their social and economic status or skin color, many told Reuters the problem had become even more evident during the election.

AIDESEP, an umbrella organization for Peru’s indigenous communities in the Amazon rainforest, slammed attempts to annul rural votes as “denying our existence.”

“They don’t understand that our country, Peru, is plurinational – it’s not just the capital Lima,” said Lourdes Huanca, an Aymara and rights activist at another organization, FENMUCARINAP.

Discrimination was systematic, she said. “To them, we are not capable; to them, we don’t know how to think; according to them, we can’t make decisions.”

Back in Carata, thin cows with prominent ribs grazed on herbs burnt by the highland sun; the potato harvest was laid out to freeze dry in the cold night air; barefoot children, with red cheeks, wrapped newborn lambs in blankets for the cold.

For Ccalla and others, the fear was that development is eroding a way of life – much older than the 200 years of Peru.

“We feel vulnerable and discriminated but we are so worried about contaminated water and soil, we can’t fight for a bigger cause,” she said.