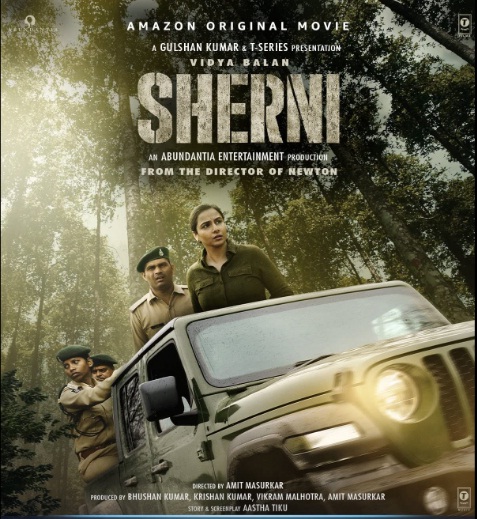 The man vs. animal battle can be relevant in several ways. The profound, shady jungle can be glamorized and turned into a battleground for a daring tale of a rescuer standing in contradiction of the many investors who lurk to tilt the equilibrium of the delicate ecology.

Or we can see with the realistic lens of the director like Amit Masurkar who has made a film like Sherni. As we understand from the title of the movie that it is about a man eating beast of the jungle who has made the lives of the villagers a living hell and also mentions to the divisional forest officer Vidya Vincent. Vidya is not shown as the typical screen heroine who fights her way to the dark waters, but is modest and strong-minded to direct the tedium of her government job in emphasising herself.

Masurkar has another remarkable movie that leaves a lot of people stunned, like Newton where he showed his shrewd understanding of the communal fabric, with the electoral officer’s attempts to conduct polls in a troubled region. With Sherni we travel through the magnificent jungle, with the sounds and sights close to the reality. Jungle and prospect of safaris are exciting for outsiders but for an officer it is their day to day job.

We see Vidya as a dedicated officer who is trying to do her work without any distractions, but because there is corruption and nepotism she is not able to do her duties. Patriarchy has been a major problem for her, even though she is a field forest officer.  After the tigress has claimed its first victim, a personality comments that during a disaster, they have to make peace with the fact that they have to deal with the ‘lady forest officer’. Vidya doesn’t hit back. She buys her time, just like the tigress making its way through the boundaries in the direction of the jungle.

Sherni intensely shows the portrayal of the persons Vidya has to work with. She finds a helper in Hassan Noorani who, like her, takes a systematic method to the man Vs. animal fight. She looks up to Nangia who talks expressively about the price of growth on the environment. The junior officers, male and female, offer backing to their senior. It’s in such concern that she discovers her will to plod on and stand her ground when the hunter Ranjan Rajhans and two opposing political groups begin to use the catastrophe for their own advantage.

Vidhya had started to realize that things are taking a drastic turn and there is no way that she can save the tigress. She keeps fighting for a very long time but even after a lot of efforts she is unable to handle the situation. The problem was not in her capabilities but in the system. She wanted to make things right but it was all just falling apart.

The transformation of Vidya happens gradually, with her growing defensive nature for a pet cat as well as the big cats. At one point an officer states that we humans might spot a tiger on our 100th trip but the tiger may have already seen us 99 times. There are attractive opinions of understanding human characters framed against the wilderness, as though seen through the eyes of the royal beasts.

Every role has been played brilliantly by the actors. Even though the movie looked subtle it highlighted the core of our society. The tigress was shown in close resemblance with the woman protagonist and how it’s wildness is perhaps haunted by the society. The beauty of the story was the ending when Vidya is successfully able to save the cubs of the tigress from the hands of the hunters.

The part of the fearless government servent was played by Vidya Balan as Vidya Vincent. The overconfident hunter who only had his eyes on killing the tiger was played by Sharat Saxena as Ranjan Rajhans aka Pintu. The shrewd male chauvinist boss was played by Brijendra Kala as Bansilal Bansal. Even the supporting actors have played their part so well that it all looked real. They were engrossed in their roles bringing out the essence of every situation.

I would rate the film 4/5 for the brilliant story and its resemblance with real life and the distinguish acting.