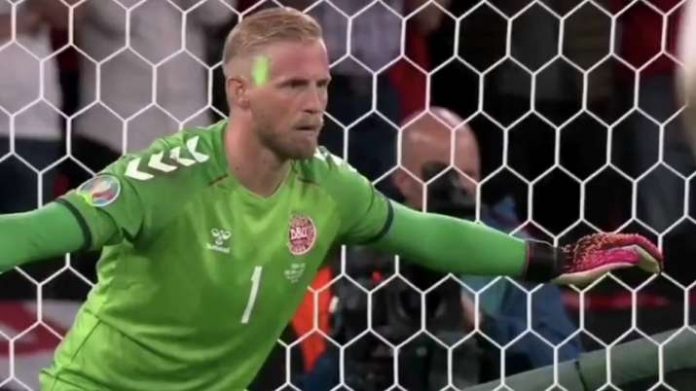 (IANS): The UEFA has opened disciplinary proceedings against England on three different incidents which took place during the second semi-final of Euro 2020 at Wembley Stadium on Wednesday. The inquiry includes the incident in which a fan used a laser pointer over Denmark goalkeeper Kasper Schmeichel’s face.

The incident took place in the 104th minute when Harry Kane was preparing to take the penalty kick. Schmeichel, whose face was shining due to a green-coloured laser, saved the penalty but Kane scored on rebound to give England a place in the Euro final on Sunday.

The laser incident finds a mention in the press release by UEFA as a violation under Article 16 (2)(d) of the UEFA Disciplinary Regulations.

England has also been charged under Article 16 (2)(g) for disturbance caused by its supporters during the national anthem. Denmark’s national anthem was booed by a section of England fans before the match started.

The third event was the lightning of fireworks by the English supporters, punishable under Article 16 (2)(c) of the Disciplinary Regulations.

“The case will be dealt with by the UEFA Control, Ethics and Disciplinary Body (CEDB) in due course,” said a statement from European football’s governing body.

England, after winning the semi-final 2-1, face Italy in the title clash on Sunday at Wembley.