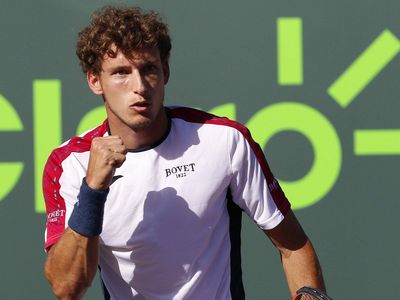 Second seed Pablo Carreno Busta of Spain continued his quest for a second ATP Tour title of the season as he overcame Federico Delbonis of Argentina 7-6(2), 6-3 to reach the final at the Hamburg European Open.

Carreno Busta will now have the opportunity to claim a sixth tour-level title and first ATP Tour 500 trophy on when he takes on Serbian Filip Krajinovic in the final.

Krajinovic reached his first ATP Tour final since 2019 as he continued his strong week by overcoming countryman Lalso Djere 6-4, 6-2.

Carreno Busta saved all four break points he faced in the match and won 75 per cent of his second-service points to advance in one hour and 55 minutes. He has yet to drop a set in Hamburg this week.

“It was a tough match, but I am very happy because Federico is a really tough player,” Busta said after the win on Saturday evening. “Always when I play against him, I am very uncomfortable. I am happy because my level today was very good.

“I probably played better in the second set, but I continued fighting all the time. I enjoy playing here, I feel comfortable here. It is my most important match this year [tomorrow]. I need to be really focused until the end again.”

Krajinovic will be seeking his first ATP Tour title on Sunday. The 29-year-old has previously reached finals at the Rolex Paris Masters (2017), the Hungarian Open and the Stockholm Open (both 2019).