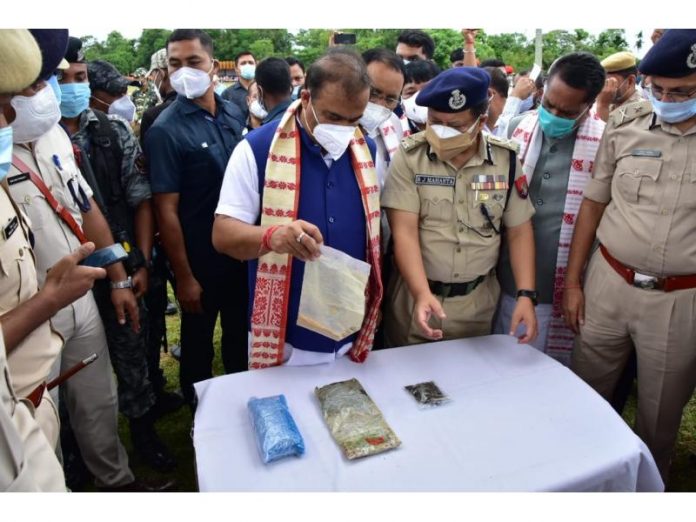 As part of Assam governments campaign against narcotics and to make the state drugs-free, seized drugs worth Rs 170 crore were burnt in public functions in four districts of the state on Saturday.

Talking to the media, Chief Minister Himanta Biswa Sarma said that the state government has taken a zero tolerance policy against the drug menace and illegal trades of narcotics.

He said that since the present government assumed office on May 10, as many as 874 cases of drug peddling have been registered, 1,493 drug dealers have been arrested and drugs worth Rs 170 crore have been seized from different parts of the state.

These seized drugs were burnt in public ceremonies in Karbi Anglong, Golaghat, Hojai and Nagaon districts.

“Amit Shah has said that drug peddling, cattle smuggling and human trafficking are the major problems of the northeastern region, which should be dealt with utmost priority,” he said.

Appreciating the Assam Police for their act of bravery, Sarma said that drugs adversely affect many families, posing a serious threat to the future of the younger generation.

He said that though Assam was earlier used by the drug dealers mostly as a transit route, gradually it emerged as a big market.

“Drugs are mostly smuggled in from Myanmar. Hundreds of youth are being led astray in Assam with various drugs,” Sarma said.

The Chief Minister further said that in spite of strong police action, drug dealers continue to work in connivance with some bad elements within the system.

Considering the nefarious design, the Chief Minister said the police have been given full operational freedom within the ambit of law to act firmly and decisively against the drug dealers so that the society can be rid of this menace.

“The amount of drugs seized could be only 10 per cent of what is coming to Assam, as drugs that go through Assam would be worth more than Rs 3,000 crore.

“There is no question of showing sympathy towards drug dealers. The state government is working to cut the supply network and stop consumption of drugs to save families and the future generation,” he added.