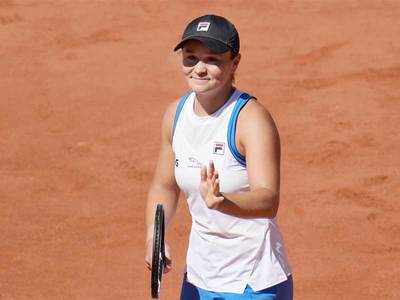 Women’s world No. 1 tennis player Ashleigh Barty pulled out of French Open midway through her second round match due to injury while fourth-seeded Sofia Kenin beat American compatriot Hailey Baptiste 7-5, 6-3 to enter third round.

Barty, the 2019 French Open champion, was trailing 1-6, 2-2 before giving walkover to Poland’s Magda Linette following recurrence of hip injury that she suffered ahead of the tournament.

“It is heartbreaking,” Barty told media after pulling out of the tournament.

“I mean, we have had such a brilliant clay-court season, and to kind of get a little bit unlucky with timing more than anything to have something kind of acute happen over the weekend and just kind of run out of time against the clock is disappointing,” she added.

Australia’s Barty, who also used to play cricket, was one of the favourites to lift the title.

“It won’t take away the brilliant three months that we have had, as much as it hurts right now,” she added.

Barty entered the match with her left leg wrapped. Her movement was hampered from the earliest stages. Though she survived three break points to bring scores to 1-1 in first set, Linette won five straight games to win first set in 36 minutes.

“We have had our restrictions and essentially tried to stay as fresh as possible and not aggravate it in any way, but in a match that’s unavoidable at times,” she said further.

Barty won just one title in the clay-court season, and that came in Stuttgart.

“It got worse today and it was becoming at the stage where it was unsafe. As hard as it is, it… had to be done. Right from the first game, I was battling the pain, and it just became too severe,” said Barty who said it is a new injury.

“[It is a] completely new injury, and I think something that I’ve never experienced before, even chatting with my physio, not something she has seen regularly either,” said Barty further.

“So we have been consulting with people all over the world to try and give us some insight into what the best ways to manage it are, to handle it, and I’m confident we do have a plan. It’s just that we ran out of time here.”