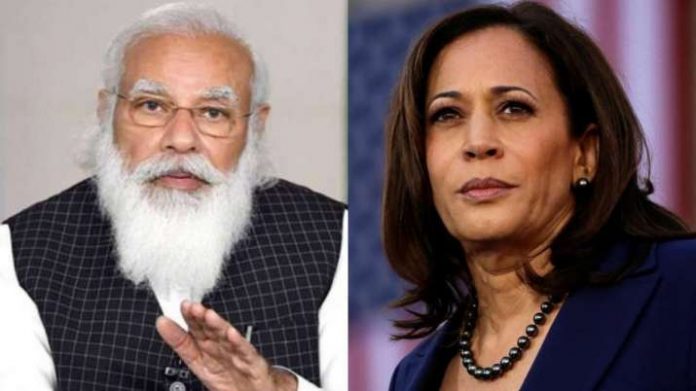 US Vice President Kamala Harris has told Prime Minister Narendra Modi that the US will be sending Covid-19 vaccines to India, following which Modi thanked her for the support from the US government and the Indian diaspora, in what was likely their first interaction.

The electronic conversation took place as US President Joe Biden announced on Thursday that India will receive Covid vaccines directly from the US stockpile, the White House said.

Modi tweeted, “I deeply appreciate the assurance of vaccine supplies to India as part of the US Strategy for Global Vaccine Sharing. I also thanked her (Harris) for all the support and solidarity from the US government, businesses and Indian diaspora.”

Biden, who has faced international and domestic pressure to share surplus vaccines, said he is releasing the first set of 25 million doses of which six million will be shared between India, South Korea, Mexico and Canada.

The six million “will be shared directly with countries experiencing surges, those in crisis, and other partners and neighbours,” he said without giving a breakdown of how many doses will go to India.

His spokesperson Jen Psaki said that the vaccines could go out as soon as Thursday “as we are working to operationalise this, which is kind of a historic Herculean effort.”

Harris has spoken to several international leaders, but till Thursday there had been no mention by the White House of a conversation with Modi, whom she had criticised in the past.

Although Harris has refrained from criticising him since assuming office, her nice Meena Harris has attacked Modi.

Calling Modi about the vaccine supply gives her clout while speaking to him.

The White House said that she also spoke to Presidents Andres Manuel Lapez Obrador of Mexico, and Alejandro Giammattei of Guatemala, and Prime Minister Keith Rowley of Trinidad, who is also the Chairman of the Caribbean Community (CARICOM).

She “notified each of the leaders that the Biden-Harris administration will begin sharing the first 25 million doses of Covid vaccines to their respective countries and others, as part of the Biden-Harris administration’s framework for sharing at least 80 million vaccines globally by the end of June”, to which they thanked her and “agreed to continue working together to address Covid-19 and advance our mutual interests around the world”, the White House said.

Modi tweeted that they “discussed ongoing efforts to further strengthen India-US vaccine cooperation, and the potential of our partnership to contribute to post-Covid global health and economic recovery”.

The Quad — made up of India, the US, Japan and Australia — had announced a plan in March for India to manufacture one billion vaccines with US and Japanese financing to be distributed to Asian countries using Australian logistics.

Biden said in his announcement that seven million doses will be earmarked for South and Southeast Asia, but did not specify the recipients.

These will be distributed through COVAX, the international consortium for providing vaccines to developing countries.

COVAX will also get six million doses earmarked for Latin America and the Caribbean, and five million for Africa.

Biden said that the US would share more vaccines from its stockpile.

“In the days to come, as we draw on the experience of distributing the vaccine doses announced today, we will have more details to provide about how future doses will be shared,” he said.

“The United States will be the world’s arsenal of vaccines in our shared fight against this virus,” Biden said.

Several members of the Congress in the US, including Raja Krishnamoorthi and Pramila Jayapal, had asked Biden to send vaccines to India, which is facing a deadly second wave surge of the pandemic.

Psaki had indicated that the vaccines would be shared by several countries.

“Our approach will be to ensure that it is distributed in an equitable manner around the world,” she said on Wednesday.

While most of the requests for sending vaccines to India focused on the 60 million AstraZeneca product in the US stockpile, Psaki said that the vaccines being donated will be a mix of those approved for use in the US — the products of Johnson & Johnson, Moderna and Pfizer.

Psaki said that the administration was waiting for FDA approval to send the AstraZeneca vaccines abroad.

Biden had so far resisted sharing vaccines globally — except with Canada and Mexico — because he wanted to be sure that under any eventuality, there would be enough for all Americans.

That was in contrast to India, Russia and China which made diplomatic headway by donating vaccines and it led to domestic criticism of Biden.

Now nearly half the population of the US has been vaccinated, according to the Centres for Disease Control, giving Biden breathing space.

But the country is battling resistance to vaccinations from a sizeable part of the population.

While there is a global clamour for vaccines, the US is battling resistance to vaccinations from a sizeable part of the population.

Authorities across the US are running lotteries with million-dollar prizes and scholarships and companies are giving out beer and pastries to coax those avoiding vaccinations to get their jabs.

According to some media reports, the US may have as many as 500 million surplus doses of vaccines in the coming months.

Former President Donald Trump had taken the risky step of ordering millions of doses of vaccines — far beyond the national requirement — from several companies under his Operation Warpspeed even before the vaccines were being tested to ensure that there would be enough of any that obtained approval for use to cover the population.

This has led to a huge surplus.

Referring to the 25 million doses that the US has committed to send abroad, Psaki said, “That is five times the number of doses any other country is committed to sharing.”

However, India has sent abroad 66 million vaccine doses before stopping donations and exports last month when it was overwhelmed by the pandemic.