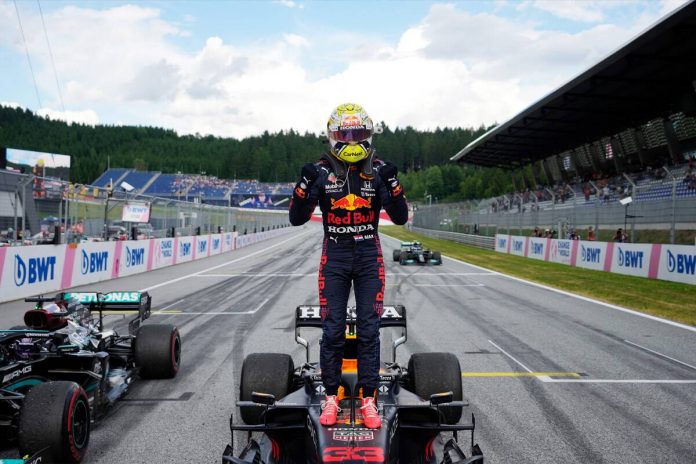 (IANS) Red Bull’s Max Verstappen extended his lead in the 2021 Formula One world championship with an easy victory in Sunday’s Styrian Grand Prix at the Red Bull Ring here.

Starting from pole position, Verstappen managed the gap to push Mercedes’ Lewis Hamilton in second place and led every lap on his way to his fourth win in eight races so far this season, reports Xinhua.

“Straightaway I felt a good balance in the car,” said Verstappen afterwards.

“It was good to manage the tyres from the start. It felt that I had tyres left [at the end of the race]. We kept on trying to hit our lap times. That worked really well today. We’ll look at what we can do better and I’m looking forward to next week. It’s looking really good, we just have to keep on going. I’m confident we can do another good job again.”

Behind Verstappen, Hamilton took a distant second on a day when Mercedes had no answer to Red Bull’s pace, though he did take the bonus point for fastest lap after an extra pit stop for fresh rubber on the penultimate lap.

Hamilton’s teammate Valtteri Bottas rounded out the podium places, just holding off the charging Red Bull’s Sergio Perez, who had lost a position earlier in the race following a slow pit stop, but rapidly closed on Bottas after also making another stop for fresh tyres late in the race.

McLaren’s Lando Norris was best of the rest behind the big two teams, finishing fifth after having qualified an excellent third, with Carlos Sainz a solid sixth in his Ferrari.

The only two drivers who failed to finish were Williams’s George Russell, who developed a hydraulic fault, and Gasly, whose contact on lap one by Leclerc led to a puncture that damaged his rear suspension.

With his win, Verstappen extended his lead in the drivers’ championship and now has 156 points. Hamilton stays second with 137 points while Perez remains third on 96. This is also the first time Mercedes have gone four races without a win since the beginning of F1’s turbo-hybrid era in 2014.

In the constructors’ standings, Red Bull are out in front on 252 points. Mercedes have 211 points in second place, with McLaren some way back in third on 120.