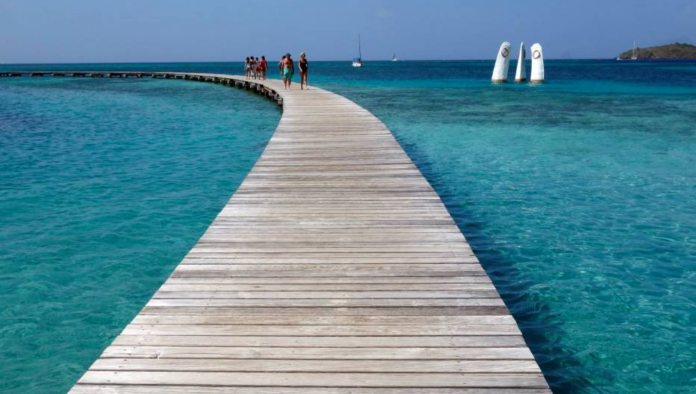 As a child, Sophie Grizzle Roumel remembers swimming in the warm turquoise waters near a beach surrounded by mangroves outside her small village on Jamaica’s west end.

Today, the white sand beach is crowded with heavy trucks and around it the land is denuded of trees as diggers level part of the mangrove forest to make way for a new $550 million resort project.

“It is a beautiful property. It is heartbreaking to see what is being done,” said Grizzle Roumel, a director of the beach resort town of Negril’s Chamber of Commerce.

“I’m devastated at the destruction and the long-term effects it will have.”

Located just past Jamaica’s famed stretch of all-inclusive resorts on the north coast, the project is a stark example of the twin challenges the country faces: how to bring in visitors and boost jobs in the wake of COVID-19 while also keeping its commitment to slowing global warming.

Across the Caribbean, one of the world’s most tourism-dependent regions, states are struggling to balance protecting the environment and stoking their economies, said Mark Bynoe, assistant executive director of the Caribbean Community Climate Change Centre (CCCCC).

“Governments are often caught in a position of wanting to do what is right, but the rest of the population is agitating to see changes and those are often measured in very discrete terms,” including in jobs and poverty rates, he said.

The new more than 2,000-room resort will be one of the largest in Jamaica, according to Spanish developer Princess Hotels and Resorts, which started preparatory work on the project two years ago.

Rafael Millan, country manager for Princess Hotels and Resorts, said the completed resort could welcome up to 4,070 visitors per day and will create 3,500 jobs.

The company is focused on minimizing the project’s environmental damage, he added. “Every single action that we take has compensation measures,” he told the Thomson Reuters Foundation in a phone interview.

That includes replanting any mangroves, seagrass and coral that are removed during construction.

“We know that preserving the mangroves is a sign of the identity of our resort,” Millan said. “There is a way to keep sustainable tourism within an existing natural area which is subject to tourism activity.”

An assessment published by the National Environment and Planning Agency (NEPA) in January 2020 noted that the Princess resort is being built in an area that includes four environmentally protected areas, including a fish sanctuary.

Once finished, the 84-acre (34-hectare) development will have removed more than 10 acres of mangroves and 10,000 square metres (107,600 square feet) of seagrass, as well as hard coral, according to estimations in the report.

Scientists say mangrove forests are invaluable to fighting both the causes and effects of climate change.

They absorb planet-heating carbon dioxide from the atmosphere and protect coastlines against storms, flooding and erosion.

The trees also provide habitat for wildlife, including the fish and crabs that locals harvest to earn a living.

As part of the permit-granting process, Princess Hotels agreed to rigorous adaptation and compensation measures, but Diana McCaulay, founder of the Jamaica Environment Trust, a non-profit, said they are not enough.

“You still lose the ecosystem functions of the mangroves in the area from which you are taking them. Even if you manage to restore them or create them in (another) part of the coast, you still leave an impact on this part of the coast,” she said.

“Even if they survive in the new area, you still have to wait 20 or 30 years for them to grow. And it may fail.”

The NEPA and Jamaica’s environment ministry did not reply to requests for comment.

Jamaica has been lauded by the international community for its commitments to addressing the climate crisis.

By 2030, the country has promised to plant three million trees, restore its mangrove forests, reduce carbon emissions by at least 25% from business as usual levels, and shift to cleaner energy sources like wind and solar power.

According to estimates in a 2019 government report, Jamaica has lost more than 770 hectares of mangroves over the past two decades for a variety of reasons, mainly coastal development.

Carlos Fuller, Belize’s ambassador to the United Nations and a former officer with the CCCCC, said balancing economic development with protecting the environment is possible but not easy.

“It is a challenge. (Belize) also really depends on establishing (economic) resources. But with hotels, we have gone much more toward small scale as opposed to the mega resorts,” Fuller said over the phone.

“At the end of the day, you may want to rush to get a quick return. But in five years, you will degrade the environment and you will lose your market.”

Figures from the Tourism Ministry show that before the pandemic, tourism accounted for nearly 10% of Jamaica’s gross domestic product.

But last year, border closures and cruise cancellations due to the pandemic caused visitor arrivals to the country to fall by nearly three-quarters.

The economy is expected to contract between 10% and 12% in the fiscal year 2020/21, according to the Bank of Jamaica.

Tourism Minister Edmund Bartlett told Parliament in April that Jamaica is relying on tourism to jump-start its post-COVID-19 recovery, with 7,000 hotel rooms due to be built over the next two years, including the Princess Hotels development.

But Sophia Frazer-Binns, a critic from the People’s National Party, the country’s main political opposition party, said the development represents a failure of the government to match words with actions.

Instead, she said, authorities should focus on smaller-scale community tourism.

“It is just one of the instances where we are seeing the government has not really shown a real commitment to environmental protection,” she said.