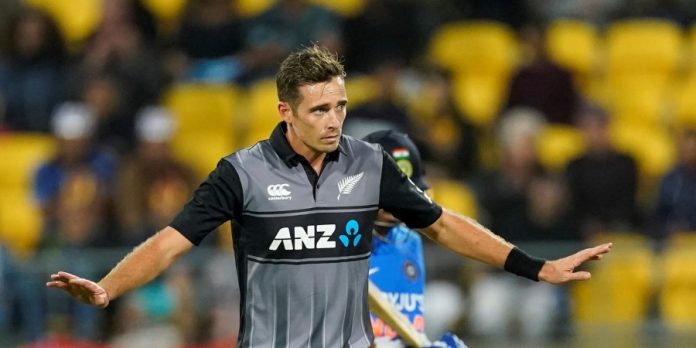 New Zealand right-arm pace bowler Tim Southee is quite optimistic about winning the opening Test against England at Lord’s after reducing the hosts to 275 all out and taking a 103-run first-innings lead on the fourth and penultimate day.

At close of play on Saturday, the Kiwis, batting in the second innings, were 62 for 2 and had taken an overall lead of 165 runs in a match where the entire third day’s play was washed out by rain.

Southee emerged the most successful bowler for the hosts taking 6 for 42, while Kyle Jamieson took 3 for 85.

Southee, who picked up five of the eight England wickets to fall on the fourth day, claiming a spot on the Lord’s honours board for the second time in his career, said: “With the wicket of (England skipper) Joe Root from the first ball of the day, we probably couldn’t ask for a better start. It was a dream start to take those early wickets but we knew there was going to be a counterpunch from England at some stage, they’re too good a side just to roll over.”

“Their lower order, especially Robinson, played a nice hand there, and Jimmy hanging around with Burns at the end, putting on over 50, blunted our attack towards the end. But I think if we’d turned up at the start of the day and been told we’re gonna walk off in the position we’re in now we’d have been pretty happy,” Southee was quoted as saying by ESPNcricinfo.com.

“Losing yesterday (to rain) doesn’t help, but there’s 98 overs tomorrow (Sunday) and it’s always great to turn up on the last day with all results possible. Who knows what may happen but it’s great to be in a position where we can push on. You play to win Test matches for your country and a Test win at Lord’s would be pretty special, so I’d imagine we’ll… get together as a side and come up with a plan for day five,” he added.