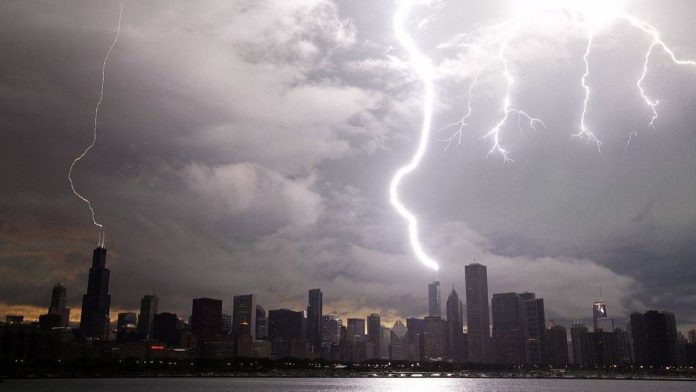 Severe thunderstorms tore through the Chicago area on Sunday night after the National Weather Service said that a “confirmed large and extremely dangerous tornado” had touched down near Woodridge, a village in Illinois, causing damage to the area.

Chicago-area utility Commonwealth Edison’s (ComEd) website showed that more than 34,000 customers were without power as the thunderstorms swept through.

The tornado touched down near route 53/75th street in Woodridge, DuPage County, around 11 p.m. ET on Sunday.

About a dozen homes were damaged, and four people were rushed to area hospitals with minor injuries, CBS Chicago reported.

A CBS Chicago reporter tweeted that six people were injured in total and some residents were evacuated to nearby shelters.

“The severe threat has diminished/ended for most of the Chicago metro area. Severe T-storm Watch remains in effect for a bit longer for Will, Kankakee, Ford, Iroquois, and northwest Indiana counties,” NWS Chicago said on Twitter.