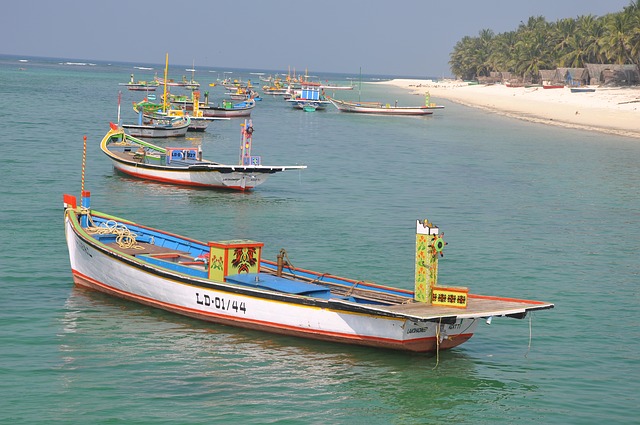 The bewitching beaches, placid sunsets, and azure Arabian sea make Lakshadweep an oasis of tranquility, and serenity. However, now the beauty is in jeopardy as the majority in this Union territory emphasizes on building mosques rather than developing UT for luring the tourists. The clamor from Lakshadweep that is reaching all ears across India is the consequence of The Central govt appointing Praful Patel as the new administrator of Union territory Lakshadweep on December 5, 2020, This is because central govt want to beautify this island, bringing reforms and prevent Islamists to impose their laws just because Muslim community is majority in Lakshadweep.

Praful Patel has proposed a set of new laws in order to reform and develop the UT for tourism like Maldives. Due to its poor infrastructure, Lakshadweep apparently fails to attract as many tourists as its captivating islands are worth. This has irked Islamists, leaving them to wail for they believe that all the decisions about Lakshadweep should be taken, ensuring they synchronize with Islamic beliefs and are acceptable to Muslim majority in UT which is around 97% of the total population. Like the prior decision of declaring Lakshadweep as a non alcoholic zone as alcohol is prohibited in Islamic culture. And The liberal lobby has mollycoddled this decision, but if the Hindu majority in India demands a ban on beef, these people vociferate shamelessly and lecture on fundamental rights. In Lakshadweep, banning alcohol is a commendable decision because it’s a Muslims dominated UT, while banning beef is not appropriate for the fabricated secularism of India. How ridiculous!

This is not the first time when Muslims have opposed something, stating it is against their culture and Islamic law they are bound to follow. In 2010, on the occasion of Gandhi jayanti, the govt had decided to install a statue of MK Gandhi at kavaratti in Lakshadweep. However, Muslims had vehemently opposed this decision, citing it’s against the sharia law. Therefore, The bust couldn’t be installed, And it was sent back to where it came from. The Islamists who now connived with other political parties have brazenly started to disseminate fake news about the proposals, saying the central govt is undoubtedly trying to snatch the land from people in the name of development, these claims which cpim, congress and Islamists raved about, have been debunked by Praful Patel.

In India, after 2014, when the bjp has come in power, since then all the welfare laws attract unnecessary protests, labelling the govt as fascist, ignoring the fact that the fascism is devouring the lives of Hindus in Bengal continuously. However, it is not worth discussing for it doesn’t scare minority, rather gladdens it. And it actensures the vote bank of political parties. And ironically, Indian media claims to be unbiased, neglecting the ceaseless violence. Therefore, it is axiomatic that a particular group of politicians, journalists and intellectuals are delighted when any part of the country is on fire.

Praful Patel has proposed some infrastructure projects of constructing new highways, Railway lines, and the opening of liquor bars in Lakshadweep to create the tourism opportunities, consequently, the Islamists have been vexed by this decision, as they believe that no development project can be accepted if it doesn’t follow Islamic law which interdicts the consumption of liquor in the region which they believe they rule. They have accused of bjp for saffronising Lakshadweep with these proposals, stating Bjp is the reason why covid 19 cases are increasing in UT, and it is also attempting to disrupt the Harmony of UT by opening the liquor bars. According to the Islamists, only the mosques are necessary in Lakshadweep for tourists to see. The central govt must thwart all these attempts of turning Lakshadweep into a captivity by a particular community and political parties must stop concocting the agenda against India for their dirty politics.

There is a preposterous notion about Lakshadweep that this UT has the lowest crime rate in India, which is vigorously lauded by congress, cpim, and ncp. However, the truth is flabbergasting. Under reporting keeps crime rate low in Lakshadweep. Serious crimes aren’t usually reported to the police station due to various religious, and political reasons. The question arises, if there is 97% Muslim majority, how can crime rate possibly be low?

The central govt is all set to develop the UTs as there are the beautiful places for tourism which will  produce new possibilities of employment in there. Unlike, the Islamists attempts to make it their private island to build mosques and impose Islamic laws which are fortunately not possible under the constitution of India. The echoes that are rocking the media, are apparently against the development, and betterment of  the UT.

What is more perplexing is pondering what is happening to Hindu minority there? Muslim community can comfortably eat beef and whatever they want, but other communities can’t drink alcohol under Muslim majority. And Muslims only follow sharia law in the UT and want other communities to follow as well. And surprisingly, it is not a threat to that secularism which shouts at Hindus wearing Tilak on their forehead because it scares minority across India. In Lakshadweep, although Muslims have majority, yet they have been classified as a scheduled tribe and get reservation in govt jobs. This political conspiracy to take over UTs and hand them over to Islamists is the reason why India can’t certainly be developed like other countries. For their vote bank, congress and other political parties are nurturing the Islamic dream of taking over India and make it an Islamic country. Ironically they oppose the Hindu Rastra even when Hindus are majority. As per this logic of Islamists which states that Lakshadweep should be a non alcoholic zone due to their majority. And congress, and other political parties are openly endorsing this illogical logic of Islamists only for their Muslim vote bank. Moreover, Nobody can possibly refute this fact that in minority of India, there is ostensibly no reverence for this secular country.

Lakshadweep can become more fascinating for tourists if it gets adequate infrastructure. Instead of building mosques and imposing sharia law. Political parties shouldn’t be a hindrance in such development projects and communalize them just because Bjp is quite great at smudging their anti Hindu agenda with development. Bjp wants to utilize all the resources to make all UTs economically strong by making them alluring tourist spots in spite of Muslim majority, ensuring the safety, security and harmony there. In this secular country, if it’s a fundamental right to eat beef, no one should lecture on what should be consumed by other community. Besides, the tourists don’t visit islands to see mosques, they generally visit places to revel, and enjoy their trips fully. Who would like to visit an island where tranquility of beaches is disrupted by the loud religious slogans coming from the mosques five times a day, where one can not drink alcohol to enjoy the serene sunsets! This is why development projects and the bars like other tourist places are the necessity of this time to attract tourists more than communal bigotry in UT. Political parties chuntering about figments and opposing development projects for the UTs shouldn’t be entertained. The central govt has the discretion and responsibilities to strengthen all states and UTs economically in which tourism always a vitally important role. Union territory can’t be owned by any particular community and impose its religious laws on people.