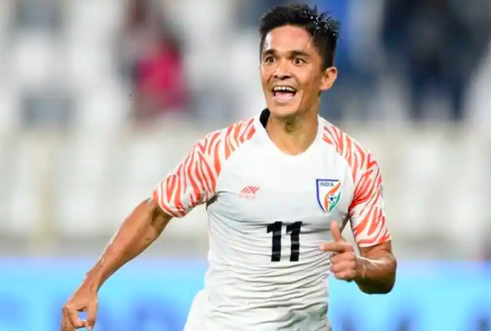 Ace forward Sunil Chhetri has become the world’s second most prolific goal scorer amongst the active players — his tally of 74 is second only to Portuguese Cristiano Ronaldo’s 103 — but the India captain is not counting them as yet. In the all-time goal scorers’ list, Chhetri is three goals short of Pele’s 77 goals.

“I do not count the number of goals. 10 years later, we will sit together, have a chat and then count. All of this is past. We play Afghanistan, and we have to be at our best. It will be a new day, a new canvas. And it is up to us to paint it the manner we want to,” Chhetri said after scoring both goals in India’s 2-0 win over Bangladesh in the FIFA World Cup 2022 and AFC Asian Cup 2023 qualifier match here on Monday evening.

The brace took Chhetri past Argentine superstar Lionel Messi who has 72 goals and the United Arab Emirates’ Ali Mabkhout who has 73 goals. Chhetri’s 79th and 90th-minute strikes gave India their first win in Group E and kept them in contention to enter the third round of the 2023 Asian Cup qualifiers.

“He’s now got more than Messi! Sunil Chhetri’s double earns the Blue Tigers a 2-0 win in #WCQ and moves him on to 74 international goals — above Lionel Messi and one off entering world football’s all-time top 10,” FIFA tweeted on Monday.

Chhetri is the only Indian player to have scored his international goals in three decades. He scored his first goal against Cambodia on August 17, 2007, in a Nehru Cup match at the Ambedkar Stadium in New Delhi. In that match, too, Chhteri had scored a brace in India’s 6-0 win.

“You know what. All of this is past. We play Afghanistan [on June 15] and we have to be at our best. It will be a new day, a new canvas. And it is up to us to paint it the manner we want to,” said Chhetri after the win over Bangladesh.

Chhetri’s India teammate Sandesh Jhingan has only praise for his captain.

“Some 100 or 200 years down the line, people will still talk about Sunil Chhetri. As long as there is Indian Football, people will remember his name. It’s for everyone to see what he does on the field. Hence, I would rather like to mention that off the field he is the perfect example for all to follow,” he said.

Another teammate, Gurpreet Singh Sandhu, said: “I will keep on mentioning that there’s one guy floating in between Cristiano Ronaldo and Lionel Messi — and that’s my teammate, my captain Sunil Chhetri. It shows his commitment and how consistent he has been scoring goals, one after the other. It’s simply remarkable.”