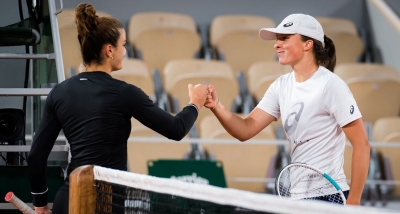 World No.9 and defending champion Iga Swiatek of Poland was tested in the first set before she pressed the accelerator to get past No.30 seed Anett Kontaveit from Estonia 7-6(4), 6-0 in the third round of the French Open on Saturday.

Iga will next face 18-year-old Ukrainian Marta Kostyuk, who became the youngest woman from her country to reach the fourth round of a Grand Slam after a 6-1, 6-2 win over Russian Varvara Gracheva.

No.4 seed Sofia Kenin of the USA overcame first-set blues to beat compatriot and No.28 seed Jessica Pegula 4-6, 6-1 6-4 for a berth in the fourth round for the third year running.

Sofia will next face either No.14 seed, Elise Mertens of Belgium, or No.17 seed, Maria Sakkari of Greece, as she aims for her third career Grand Slam quarter-final.

Earlier on Saturday, American Sloane Stephens gave an indication of her French Open ambitions, defeating No.18 Karolina Muchova of the Czech Republic 6-3, 7-5 in one hour, 55 minutes to move into the pre-quarterfinals.

The 2018 runner-up will next face another Czech player, world No.33 Barbora Krejcikova, who had won her maiden title in Strasbourg last week to signal her intent.

Karolina and Elina’s exit means the only seeds remaining in the top quarter of the draw are No.13 Jennifer Brady, No.24 Coco Gauff (both USA) and No.25 Ons Jabeur (Tunisia).

Sloane, who has now reached the fourth round on seven of her 10 appearances at Roland Garros, was in control of the proceedings from the start, taking a 6-3, 2-0 lead.

The world No. 59 American got 84 per cent of her first serves in and, combining it with aggressive play, left Karolina clueless.

Though Karolina did come up with occasional winners, the Czech player was unable to consistently trouble Sloane.

“My first big fourth round or whatever at a slam was here,” said Stephens. “And obviously consistently making fourth round here has been kind of a staple for me, which has been great. Obviously one of my favourite tournaments of the year, so peaking here has always been really important.”

Barbora Krejcikova, 25, a former doubles world No. 1 who won the French Open title partnering country-mate Katerina Siniakova in 2018, had also reached the fourth round here last year to break into the top 100. Since then, her career has been on the upswing and last week she captured her maiden title in Strasbourg.

On Saturday, Barbora simply blew away the No.6 seed Elina with her carefully-disguised shots, which fetched her 38 winners in the match.