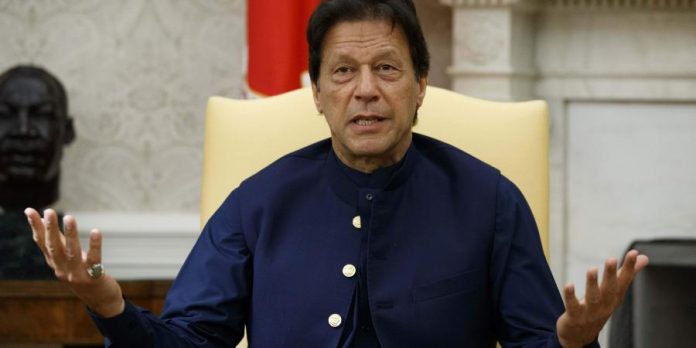 Pakistan’s Prime Minister Imran Khan is facing protests and calls for a public apology after suggesting that there would be fewer sexual assaults if women dressed more modestly, Washington Post reported.

In an interview with Axios earlier this week, Imran Khan was asked about whether there was a “rape epidemic” in Pakistan, where advocates believe that a large number of assaults go unreported.

“If a woman is wearing very few clothes, it will have an impact on the man unless they are robots. I mean, it’s a common sense,” he said.

Women in Pakistan responded by sharing photographs of the “modest” clothing that they were wearing when they were sexually harassed, as well as anecdotes about inappropriate behaviour they have encountered – such as unwanted touching – even when conservatively dressed in traditional headscarves and shalwar kameez, the report said.

At a protest on Saturday in Karachi, women were encouraged to bring a piece of clothing that they or an acquaintance had been wearing when they were subjected to sexual violence.

“This is dangerously simplistic and only reinforces the common public perception that women are ”knowing” victims and men ”helpless” aggressors,” the Human Rights Commission of Pakistan (HRCP) and more than a dozen other civil society groups said.

“For the the head of government – a government that claims to defend the rights of women and vulnerable groups – to insist on this view is simply inexcusable.”

The report said it’s the second time in recent months that Khan – who was one of Pakistan’s top cricket players and a national celebrity before he entered politics – has come under fire for his comments about rape. During a live television broadcast in April, he replied to a question about a perceived rise in sexual assaults by saying that the traditional custom of “purdah,” or modesty, was intended to “stop temptation.”

“Not every man has willpower. If you keep on increasing vulgarity, it will have consequences,” Khan said.

Khan’s latest remarks have led some men in Pakistan to proudly declare themselves to be robots, a joking reference to the Prime Minister’s claim that seeing a woman who is not modestly dressed “will have an impact on the man unless they are robots.”

The report said Sherry Rehman, a senator from the opposition Pakistan People’s Party, questioned whether Khan meant to apply the term to “all the men who are civilized in their behavior and interactions with women.”

She added sarcastically that she didn”t realize Pakistan “had such a large AI population.”

News Pakistan reported that a large number of women rights and civil society activists took part in a protest in Karachi on Saturday to criticise Prime Minister Imran Khan’s remarks about the way women dress up and its impact on men, and urged him to offer a public apology for his remarks.

The HRCP and other civil society bodies and feminist collectives organised the protest outside the Karachi Press Club.

As per the report, calling the premier’s comments “factually incorrect, insensitive and dangerous”, speakers at the protest said that it only reinforced the common public perception that women were “knowing” victims and men “helpless” aggressors”.

“Imran Khan has disgraced not only the millions of women but also the high human ideals and values, which are even upheld by the international charter of human rights,” said a speaker.

Participants also showed their anger at several women members of the ruling party who had jumped to the Prime Minister’s defence and justified his comments in “vague and illogical terms”.

They appealed to the women legislators in the Senate and the national and provincial assemblies to pass a resolution against the Prime Minister, irrespective of their political affiliations, the report said.

They demanded an immediate public apology from the prime minister and assurances that “his highly flawed perception of how and why rape occurs does not inform the government’s attempts to tackle what is a serious and prevalent crime in Pakistan”.