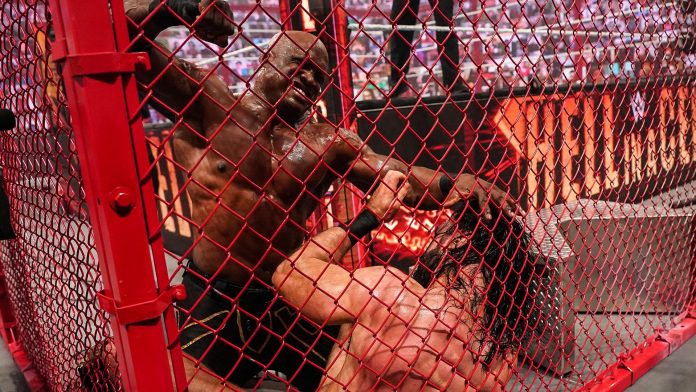 For weeks, Bayley laughed at Bianca Belair. But the SmackDown Women’s Champion had the last laugh inside Hell in a Cell, winning a brutal battle to retain the title.

With flames adorning Belair’s gear, the Hell in a Cell first-timer appeared well aware of what awaited her inside the demonic structure and was ready for the unique stage.

But after a hot start by Bianca, The Role Model reversed course by countering a superplex, slamming the titleholder face-first into one ring post before smashing her left shoulder into another and continuing to target the same arm.

Bayley showed there was no line she wouldn’t cross. The challenger bit Belair and even tied her hair in a knot around the bottom rope to keep her at bay.

Bianca turned the tables, driving Bayley through Kendo sticks with a spinebuster and further brutalizing her after tethering her own hair to Bayley’s arm.

Belair combined equal parts innovation and viciousness to put Bayley away. After hitting a Senton with the challenger on the ladder, Bianca planted Bayley with the K.O.D. on the same ladder for the victory.

Match Review: 4/5. This was a wonderful match which went better than I expected. The only complain that I’ve is Bianca Belair overused ‘using’ her hair. Anyways, predictable end but a wonderful 4/5 match nevertheless. Sasha is goat.

Seth Rollins achieved redemption for what he called fluke victories by Cesaro at WrestleMania and last month on SmackDown, finally defeating Cesaro at WWE Hell in a Cell.

Rollins started quickly by attacking Cesaro’s blindside during his entrance, but The Swiss Superman fought back and neutralized the underhanded advantage while also setting the tone for a highly physical bout.

After writhing in agony while locked inside the Sharpshooter, Rollins deftly pulled his adversary down into a small package for the three-count out of nowhere, stunning Cesaro. And while the circumstances may have been fluky, The Architect was more than happy to celebrate.

Match Review: 4.25/5. This felt like a notch better than their Wrestlemania fight, WOW, Seth and Cesaro tore the house down. I missed the crowd. A wonderful match with a small package ending that I didn’t expect.

On a night full of brutal action at WWE Hell in a Cell, Alexa Bliss gave the WWE Universe a heavy dose of the bizarre in a unique win over Shayna Baszler.

Baszler was initially hesitant, perhaps not entirely ready for her strangest opponent yet. With a distraction from Reginald at ringside, though, The Queen of Spades took control with a clothesline.

Baszler continued to strike Bliss, but Bliss simply answered with laughter. After spiking Baszler with a huge snap DDT, she appeared to absorb Nia Jax in some sort of trance at ringside, seemingly commanding her to slap Reginald.

The Submission Magician tried to take advantage of the chaotic scene, locking on the Kirifuda Clutch until Bliss fought free. The sinister Bliss hit a modified Sister Abigail and Twisted Bliss for the win, tormenting her enemies for yet another night.

Match Review: 1.5/5. Yawn. This doesn’t work in 2021. Hypnotism, seriously? I am 28 now and it’s getting hard staying a wrestling fan due to things like this.

Kevin Owens and Sami Zayn have shared dozens of battles over the years, but Zayn prevailed in perhaps their hardest-hitting chapter at WWE Hell in a Cell. KO was all business from the outset, pummeling Zayn from the opening bell and dominating his longtime friend-turned-rival. But the throat injury Owens suffered at the hands of Commander Azeez on SmackDown played a pivotal role as Zayn turned the tables by splaying Owens throat-first on the second rope.

To make matters worse for KO, he appeared to suffer a possible left wrist injury, one that was bad enough that the referee appeared to weigh stopping the match.

But to no one’s surprise, Owens tapped into his reserves and fought back on pure instinct. He finally hit a Stunner on Zayn on the outside, but The Great Liberator narrowly beat the 10-count.

The slugfest continued back in the ring until Zayn blasted Owens with a Helluva Kick to finally put him away.

Match Review: 4/5. Sami Zayn and Kevin Owens ALWAYS deliver and this was NO different. They just kept fighting over and over and again and again. The chemistry in this match was flawless, and the finish felt clean and fitting.

Charlotte Flair will go down as victorious in the record books at WWE Hell in a Cell, but Rhea Ripley is still the Raw Women’s Champion.

Flair claimed an unsatisfying disqualification victory, leaving her still without gold around her waist.

The Queen seemed destined to reclaim the title as she dominated much of the action in only their second one-on-one meeting and first since WrestleMania 36. She seemed to frustrate The Nightmare at every turn, not allowing Ripley any chance to build momentum.

Ripley eventually roared back. She soared to deliver a top-rope dropkick. Flair quickly stymied the rally with Natural Selection, though she was admonished for attempting to use the ropes for added leverage on the ensuing cover.

The bout eventually broke down into an all-out battle of strikes, and Ripley finally hit the major offense she needed, dropping Flair with the Riptide — though Charlotte found a way to drape her boot on the bottom rope.

Doom appeared imminent for Ripley when she found herself caught in the Figure Four. But after escaping to the outside, The Nightmare smashed Charlotte in the face with part of the announce table to prompt the disqualification.

The fight was far from over, and Ripley got the better of it, dropping Flair with another Riptide back in the ring before leaving with the title still in hand.

Match Review: 3.5/5. A good match with a terrible end. We want to see clean finishes on PPVs. Other than this small rant, everything else felt good. Rhea is good as ever and Charlotte belongs on the top.

Bobby Lashley Vs. Drew McIntyre (Hell in a Cell Match)

After warring for months, Bobby Lashley and Drew McIntyre took their rivalry to a fitting barbaric crescendo inside Hell in a Cell, and The All Mighty reigned supreme to retain the WWE Championship.

As a result, McIntyre will not be able to challenge for the WWE Title as long as Lashley is Champion.

McIntyre started off strong, beating Lashley all around the ringside area, bashing him repeatedly into the chain link before leveling him with the steel steps. The champion was dazed early following a massive overhead belly-to-belly.

Lashley used MVP’s cane as a means to get back in the match. The All Mighty showed a previously unseen propensity for aggression, later sandwiching McIntyre into the cage repeatedly with the steps.

But Kendo stick strikes to McIntyre seemed to ignite a fire in the challenger, who clawed back — until a thumb to the eye by Lashley led to chaos with the referee being knocked out of the ring and unable to count McIntyre’s pin after a Future Shock DDT.

The second referee was in the ring after McIntyre hit a Claymore moments later. So was MVP to pull the official out of the squared circle and disrupt the count, however. MVP would quickly regret his involvement as The Scottish Warrior assaulted him and blasted him with a Claymore.

By then, though, Lashley had recovered and ambushed McIntyre with the Hurt Lock, only to be rammed backward through a table set up against the cell.

Back in the ring, the challenger pulverized Lashley with the chair. But The All Mighty answered after dodging a Claymore, showcasing his awe-inspiring strength by sending McIntyre through a table at ringside from the apron.

McIntyre still had one last gasp left. After delivering a Glasgow Kiss and another Future Shock DDT, he appeared poised to deliver another Claymore — only for MVP to grab his boot.

Lashley capitalized, rolling up McIntyre for the three-count and leaving him in disbelief as his last chance at becoming champion for the foreseeable future slipped through his fingers.

Match Review: 4.25/5. Another shady finish to a brilliant match. I know WWE wants to protect both Bobby and Drew McIntyre, but PPVs are a place where we want to see clean finishes. Roll ups are boring. Everything else in the match was perfect, and I wanted to rate it higher but 4.25 is as high as I go due to a bad end.