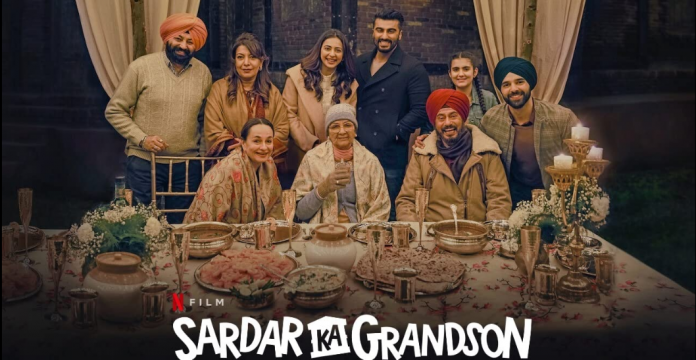 The movie is loosely based on the Indo-Pak partition in 1947. It was divided into 2 different countries, India and Pakistan; later Bangladesh was separated from Pakistan and was made into a different state. The war has been on ever since. The movie is combined with flashbacks and present scenes.

The movie begins with Amreek who has a movers and packers business in Los Angeles with his fiancé, Radha. He is not very good with the business; he breaks stuff and does not even feel apologetic about it. Radha feels bad about Amreek’s behavior but she fails to make him understand anything and eventually breaks up with him and leaves the house.

Saddened, Amreek gets the news of his grandmother being severely ill in India and comes to know of her peculiar wish to go to Lahore, Pakistan. Amreek is ready to leave for India. Upon reaching, he enters the house like a thief and gets bitten by the dog. He finally meets his grandmother who is more than happy to see her grandson.

He asks her why she wants to travel to Lahore to which she replies that she has a home there which she had built with love. She start to reminisce her old memories and with each scene in the movie we see few clips of the nostalgia being relived by Amreek’s grandmother Sardar.

Sardar is reluctant to forgo her wish. Amreek tries everything he can in his control to take her to Lahore but all in vain. He then has an idea to bring the house here, which seems very shocking to many but he claims that he can do it.

So, he packs his bag and travels to Lahore – after fighting off villains and getting united with his love he is finally able to bring his house back to India. Sardar is very happy to see her home and she can’t stop thanking Amreek.

Unlike Neena, Arjun can’t even blame thick makeup for his dull performance. But in fairness to him, the script — co-written by director Kaashvie Nair, with Anuja Chauhan and Amitosh Nagpal — isn’t something that an actor can elevate.

The family shown in the movie is a typical Punjabi one who cuss every now and then and are ready to take over the property as soon as the grandmother dies. In parallel, there is a story of young Sardar and her husband playing in the background. Sardar runs from Pakistan after the violent clash that happened during the partition.

Speaking from a reviewing point of view, there is a lot of issue in dialogue delivery, the actors who are supposed to speak in Punjabi have made the language sound like Hindi – with due respect to both the languages. The dialogues seem to have lost their meaning and essence.

The movie plot is exaggerated, with lazy dialogue delivery and poor performances of the actors. The writers have tried really hard to make the movie look good, the story could have been better, the concept was funny yet emotional but it could not reach its zenith. However, the pleasant vibes of a Punjabi family are perceptible in the movie.

This movie has been co-produced by John Abraham. The cast has Arjun Kapoor as Amreek who has been unimpressive with his acting. Rakul Preet Singh plays the role of Radha who tried hard to complement Arjun Kapoor but all in vain. Neena Gupta looked ravishing as always, as Sardar, and showcased the best of her acting prowess. Aditi Rao Hydari is seen as the young Sardar and John Abraham as the husband of young Sardar. They had beautiful chemistry but the language delivery could have been more appealing. The movie is neither too boring nor too exciting – it’s a one time watch.

I would rate the film 3/5 for the decent story but poor delivery of the actors.