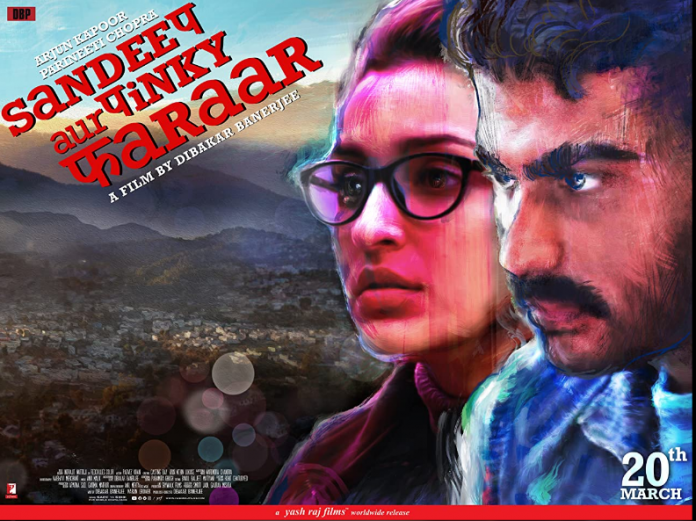 The movie can be considered as a mixed one but it was still a good movie that I have watched in a very long time.

The movie revolves around a young and aspiring woman Sandeep. The movie starts with Sandeep aka Sandy waiting in the hotel for her date and she bumps into a media reporter who invites her to a party in a farm house, but since she is meeting someone she refuses.

Sadly her date doesn’t come and she is ready to go to the party, while leaving she sees a man from Haryana Police trying to talk to her, he tells her that her boss has sent her to receive her.

She agrees and leaves with him, but to their dismay, it was a plan for an encounter that Sandeep and Pinky would become a part of. Pinky and Sandeep make a run for their life.

Several Bollywood films are driven by the formulae that when a couple falls in love, they have to run because the family is not ready to accept their love. When I first saw the name, I thought the movie would be quite similar to this but to my surprise it wasn’t.

The pessimism is acceptable but also in this case, inappropriate – because as it turns out, Sandeep Aur Pinky Faraar is a notice that Bollywood is, in truth, an assorted industry filled with astonishments, some of which go by conventional-sounding film titles that deliberately throw the viewer off the scent of their eccentric storylines.

Dibakar Banerjee’s Sandeep Aur Pinky Faraar that the director has co-written with Varun Grover is about two people who need to help each other when caught in a seemingly impossible situation. Sandeep Walia a.k.a. Sandy and Satinder Dahiya a.k.a. Pinky have to come together to save themselves because Pinky now knows that whomsoever is trying to kill Sandeep will kill him too.

Sandy is educated and an important official in new upcoming private bank in India, on the other hand Pinky is a messy discredited policeman from the Haryana force. Just like the title, her superior finesse and his crude behaviour both conceal more than they let on.

They leave from Gurgaon to the town of Pithoragarh in the mountains of Uttarakhand. As the movie moves forward we know why the killer in trying to get to her and they form an association initially led by pressure and later by choice.

As the movie goes on we realize that Sandy is the focal point of the movie, but we did not know about the intentions of the protagonist until when we were supposed to know about her. I think this is what a good story is all about; revealing one thing at a time and also when it will be relevant – this way the movie doesn’t get chaotic.

We see a tale of corruption, the interesting small-town life, a frighteningly truthful note on the spiteful bitterness that the most simple-looking men might have towards a woman who seems inaccessible to them – and all this paralleled by an all-embracing faith in humankind.

The protagonists of Sandeep Aur Pinky Faraar slip up in underestimating their opponents, but their enemies too slip up by underestimating them as a result, and a man errs in directing condescension at a woman who has a mind of her own.

The performance of Sandeep played by Parineeti Chopra is subtle and she maintains the character till the end of the movie. The role of Pinky is played by Arjun kapoor, even though he tries very hard to be a rude cop, it doesn’t transcend onto the screen. Sandeep Aur Pinky Faraar is clearly aiming at a thoughtful quality with its story style and modest contextual score. The film could seem like a bit of a drag but it is not – you just don’t have to judge the movie by its name. The movie is mixed with remorse as well as a happy ending – it may or may not leave you wondering what will happen to the two characters.

I would rate the film 3.75/5 for the brilliant story and unthinkable ending.