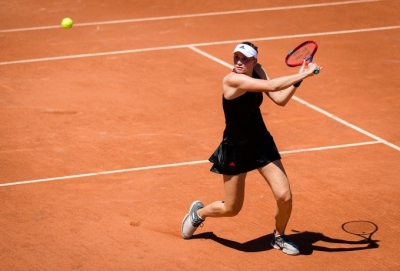 Elena Rybakina of Kazakhstan on Sunday created a massive upset as she defeated three-time champion and seventh seed Serena Williams of the USA 6-3, 7-5 in the fourth round and entered the quarterfinals of the French Open.

Elena stunned the 23-time Grand Slam champion in one hour and 17-minute. The Kazakh was playing in her first ever round-of-16 match in a Grand Slam tournament and her 64th.

Elena converted five of her seven break points, besides winning nearly 60 per cent of points returning the Serena’s second service.

Elena will face Russian Anastasia Pavlyuchenkova in the quarterfinals.

Anastasia, 29, fought back from a set down to beat No.15 seed Victoria Azarenka of Belarus 5-7, 6-3, 6-2 and enter the quarterfinals, 10 years after her maiden French Open quarterfinal appearance, in 2011. This is the seventh Grand Slam quarterfinal for Anastasia, and her first outside Australia in five years.

Meanwhile, Slovenia’s world No. 85 Tamara Zidansek’s dream run continued at the French Open as he delivered a masterful performance to beat a higher-ranked Romanian Sorana Cirstea 7-6(4), 6-1 and move into her first Grand Slam quarterfinals on Sunday.

Serena said it was a “close” match.

“I got some good matches in here. I did not have the best clay-court season, but it was good to finally get some wins on clay. It was definitely close,” Williams said at a press conference after her match with Elena.

“There is literally a point here, a point there, that could change the whole course of the match. I’m not winning those points. That literally could just change everything. “

Tamara, 23, also became the first Slovenian player to enter the quarter-finals of a Grand Slam event since the country attained independence in 1991.

Prior to Sunday, Tamara had never got past the second round in a Grand Slam, but she had given an indication of her potential when she had accounted for No.6 seed Bianca Andreescu of Canada in the first round.

The best a Slovenian player has gone in major was former world No.20 Katarina Srebotnik who made it to the fourth round of the French Open in 2002 and 2008, and the US Open in 2008.

Tamara showed great composure that belied her rookie status, saving six out of the seven break points she faced, including a set point at 5-6 in the first set.

Sorana, the 54th ranked Romanian, who had been seeking her second Grand Slam quarter-final place since the 2009 French Open, committed several double faults, including giving up a double break with consecutive double faults.