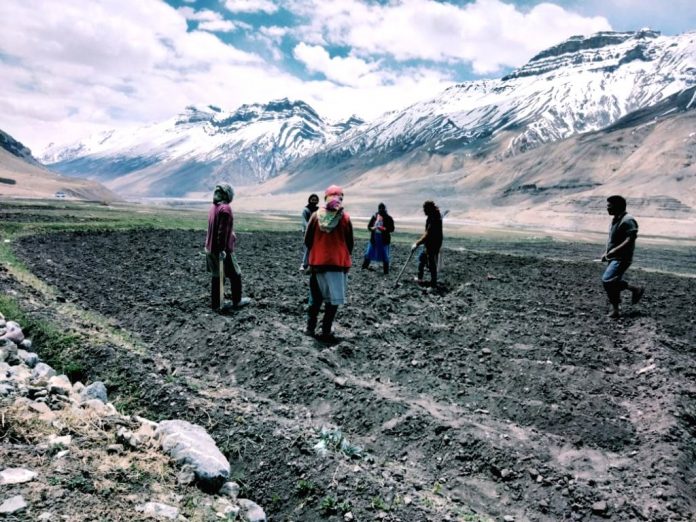 Agricultural experts told IANS that fearing that the Covid-19 lockdown would hamper marketing of their cash crops the farmers last year went for cultivating the black peas in the sole cultivation season that is less than five months from May.

“Last year a majority of farmers were uncertain about the marketing of the produce amid the countrywide lockdowns. So they preferred the cultivation of the black peas owing to its longer shelf life,” the state Agriculture Department’s Block Technology Manager Sujata Negi, who is based in Kaza, told IANS over phone.

“Since the black pea is used largely for personal consumption, they still have enough stock. Secondly, this year inter-state movement is allowed amid the Covid-induced lockdowns, the farmers are confident that they could easily market the produce in the neighbouring states of Punjab, Haryana and Delhi, where it commands good profit,” she said.

The major markets are in Punjab, Haryana and Delhi, with Solan town in Himachal Pradesh being a major hub for vegetable trade.

Nearly 1,500 farmers in the Spiti Valley, with a population of 12,000, are doing one hundred per cent natural farming with no use of chemicals. They have also been growing other vegetable crops like cabbage, cauliflower and barley.

“This season the farmers’ focus is more on cultivating the green peas for more revenue earning and it suits the agro-climatic conditions too,” Negi added.

Spiti Valley, the paradise that straddles both India and Tibet comprising over two dozen small and scattered villages, remains cut off owing to heavy snow accumulation for at least six months a year.

It reopens once the snow starts thawing after mid-April.

Experts say this time the sowing of vegetables is late owing to an extended winter.

“We have just finished the sowing of peas. The crop will be ready for harvesting in late August or early September. Since the shelf life of the green peas is at least 10 days, they can be easily transported to Chandigarh and Delhi for marketing,” said farmer Tashi Bodh, who is settled on the outskirts of Kaza, some 320 km from the state capital.

According to him, the area is known for producing disease-free high variety peas grown in natural conditions.

“Our peas command a good market in the plains in September when the crop is not coming from elsewhere. At that time the returns are more than double,” another grower Sonam Dolkar added.

The cash crops at an altitude ranging between 3,000 metres and 4,000 metres that receives negligible rainfall are grown in summer and cultivated in August-September.

The farming is largely based on the snow-fed ‘kul’ irrigation system — channels to carry water from the glacier to the fields.

Block Technology Manager Negi said most of the farmers adopt zero-budget natural farming, a chemical-free method. They normally go for multi-cropping in the total cultivation area of 1,230 hectares.

Cultivation of exotic vegetables in poly-houses is also coming up in a big way.