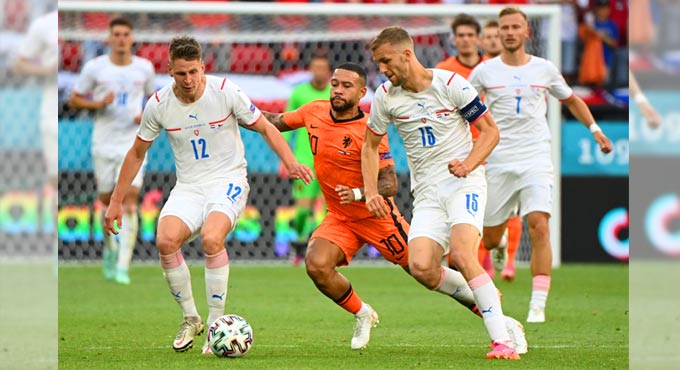 (IANS) Two second-half goals from Tomas Holes and Patrik Schick helped the Czech Republic book a Euro 2020 quarterfinal berth after getting past Frank de Boer’s Netherlands 2-0 in a round-of-16 match at the Puskas Arena here.

The Dutch caused problems for the Czech initially with their pace on Sunday, but Matthijs de Ligt and Denzel Dumfries lacked accuracy upfront, reports Xinhua.

With 37 minutes gone, the Czech got the best opportunity in the first half but Antonin Barak’s promising shot from close range was blocked by De Ligt in the nick of time.

The Netherlands were off to a promising start in the second half and should have opened the scoring, but Donyell Malen failed to beat Czech goalkeeper Tomas Vaclik in a one-on-one in the 52nd minute.

The momentum of the game changed though moments later as De Ligt was sent off for a handball, which weakened the Dutch. The Czechs immediately utilised their numerical advantage and snatched the opener through Holes, who nodded home a flicked-on set piece with 68 minutes played.

Frank de Boer’s men pressed frenetically for the equaliser, but they got caught flat-footed by a clinical Schick, whose fourth goal of the tournament sealed the deal with 10 minutes remaining.

The Czechs will clash with Denmark in the quarterfinals on July 3 while the Dutch will travel back home.

“The goals we gave away, the chances we didn’t take; all that goes through your head. After the red card we found it difficult to put them under pressure. Things just got more difficult for us,” Netherland’s captain Georginio Wijnaldum said.

“No one was expecting us to reach the quarterfinals. We are super happy. We do not have a lot of stars in our team, but we had the team spirit. Of course, De Ligt’s dismissal was crucial and made things a lot of easier for us,” Czech Republic striker Schick said.