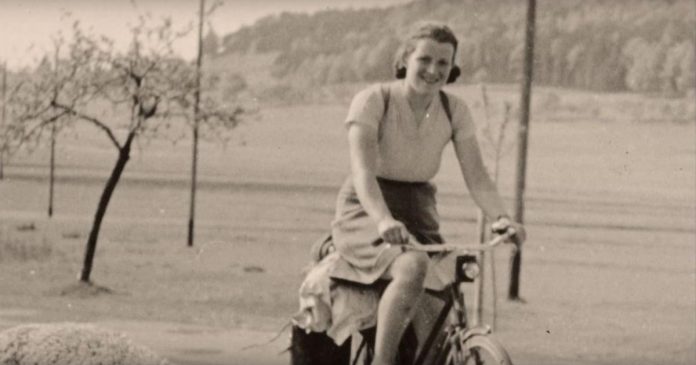 Dervla Murphy is one of Ireland’s most famous travel writers and a magnificent woman in her own right. She has travelled the world, mostly by bicycle, and battled societal issues along the way. Dervla is now 89 and has settled down in Lismore with her two cats and dog.

In 2018, The Guardian’s Philip Watson conducted a rare interview with Dervla to learn more about her travelling ventures. He reported:

“Murphy is a true traveller, the real deal. She hates hotels (“they reek of the nastiest sort of affluence”), prefers “doss houses”, and can sleep anywhere. Just 18 months ago, at the age of 84, she spent the night on the floor at Gatwick airport before a morning flight back to Ireland.”

Dervla has travelled to the most remote and unstable territories in the world. She prefers the inhospitable areas that do not subscribe to the chaos and technology of the modern world. She has encountered several near-death experiences, including a close call with some bandits in Ethiopia on a thousand-mile trek. She has been to Rwanda after the genocide, South Africa towards the end of apartheid and Romania after the fall of Ceausescu. She travelled to areas with intense social and political issues and reported them to the world with her series of travelogue books.

She has also experienced some serious illnesses and injuries throughout her fifty years as a travel writer. She had amoebic dysentery in Pakistan, gout and hepatitis in Madagascar, tick bite fever in South Africa and brucellosis in India. She also fractured her coccyx, broke her foot, injured her knee and ankle and even needed an entirely new hip after an accident in Palestine. Nevertheless, Dervla is not afraid to get stuck in at the deep end – and experience a country for everything it has to offer.

After travelling for so many years, Dervla developed a few pet peeves along the way. She doesn’t like seeing the development of motorways in remote areas, mass tourism or global capitalism. Dervla described herself as living a “simple life” and despises the constant presence of technology in the modern world. She doesn’t have a TV, washing machine, central heating, or mobile phone. Instead, she handwrites her books and then transcribes them on a typewriter. It’s fair to say that she prefers doing things the old-fashioned way.

She has written a fair few books in her time – however, Dervla announced to Watson that she has ‘reluctantly retired from writing books’ now. Full Tilt: Ireland to India with a Bicycle was her first book – published in 1965. She received outstanding praise for the book and wrote over twenty more titles after – including Tibetan Foothold, The Waiting Land: A spell in Nepal, In Ethiopia with a Mule and On a Shoestring to Coorg: An Experience of Southern India.

Dervla has been described as ‘the first lady of Irish cycling’ as she completed many of her trips on foot or bike. Her passion for travel and cycling may inspire readers to take a cycling holiday of their own. A cycling holiday is a great way to see the natural landscapes and stunning views of a country while straying from the typical tourist path. However, perhaps, readers should opt for a safer destination than Dervla’s ventures.

Travelling is a wonderful way to see the world and experience new cultures, languages, and people.