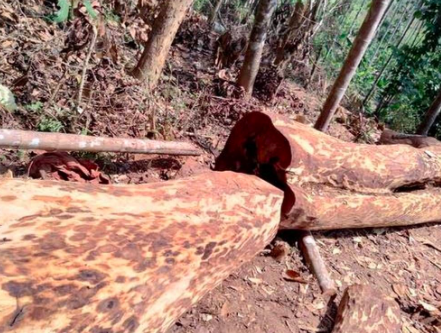 A timber dealer named Rojy Augustine, who is presently in the dock after forest officials alleged that he had felled expensive rosewood trees in Keralas Wayanad, claimed on Thursday that he had cut the trees as per the rules and to get the necessary papers, he had paid Rs 25 lac as bribe to the forest officials.

Incidentally, the issue was raised in the Kerala Assembly by the Congress-led opposition on Tuesday, while the same case surfaced in the Kerala High Court the following day.

In an hour long interview given to the Manorama TV that was telecast live, Augustine claimed that he had done no wrong, as he went by the rule book.

“Now that this has become a big issue and the forest officials are in the dock, they want to trap me because they know that they had violated the rules. I cut around 56 trees in my property in Wayanad, besides purchasing a few trees from the neighbouring places as well. The trees were then sold for around Rs 2 crore. I had paid Rs 25 lac as bribe to various forest officials to get the necessary papers required for the sale and transportation of the timber,” Augustine claimed.

He, however, gave a clean chit to the revenue officials as well as the politicians.

On Tuesday, the issue was raised in the Assembly by Congress legislator P.T. Thomas, who had cast aspersions on state Forest Minister A.K. Saseendran, which was quickly denied by the minister, who said that he took over as the Forest Minister only on May 20.

“I have a licensed timber depot, but the business which I did has now turned controversial. I paid 36 per cent tax to the state government and everything I did was done as per the rules. I have filed five cases against the hardships which I am undergoing in this business. I do not have anything to fear as I have done no wrong,” Augustine said.

However, S. Badushah, an environment activist in Wayanad, said that he has heard what Augustine had to say, but he didn’t believe that all that he said was true.

“Augustine says he had bribed the forest officials, but the two names that he gave are known to be officials with high integrity. I do not think that the revenue department is clean. Moreover, this same person (Augustine) was in the news a few years back for the launch of a mobile phone, which never saw the light of the day. There should be a high court monitored probe into this forest scam,” said Badushah.

In a related development, Union Minister of State for External Affairs, V. Muraleedharan, along with Kerala BJP chief K. Surendran met Union Minister of Environment and Forests, Prakash Javadekar, at his office in Delhi on Thursday and asked for a detailed probe by his department into the way permission was given by the Kerala government for mass felling of rosewood trees, which, according to media reports, are worth Rs 130 crore.

The alleged scam pertaining to the felling of centuries-old rosewood trees in Kerala’s Wayanad district by flouting norms took a new turn on Friday with the BJP asking the Wayanad MP Rahul Gandhi to break his silence on the matter.

Union Minister of State for External Affairs V.Muraleedharan on Thursday called on Union Forest and Environment Minister Prakash Javadekhar in the national capital and demanded a detailed probe by his ministry in connection to the massive felling of rosewood trees in Wayanad district.

Muraleedharan was seen on Friday morning moving around those interior areas of the district where the trees were illegally axed.

“This Wayanad constituency has now become a high profile one and its MP Gandhi is surprisingly silent on the crores of forest trees, which protect the environment, have been cut illegally and sold.

We have not heard a word from him and so does it mean he is also a silent supporter to what’s happening? He should break his silence,” said Muraleedharan.

He asked Javadekhar that a probe should be launched to find out the Rs 130 crore trade of rosewood trees that was felled from various places in Wayanad and other districts.

“Not long ago, when steps were not taken to douse the fire that broke out in the Amazon forests by authorities, and presently those in power here led protests against the incident.

Just see what the very same people are up to, by coming out with orders favouring the mafia and it has come to light that similar things have happened in other districts also. BJP will not allow this to happen,” said Muraleedharan.

It was on Thursday a timber dealer named Rojy Augustine, presently in the dock, after forest officials alleged that he had felled expensive rosewood trees in Wayanad, claimed that he had cut the trees as per the rules and to get the necessary papers, he had paid Rs 25 lakh as bribe to the forest officials.

Incidentally, the issue was raised in the Kerala Assembly by the Congress-led Opposition on Tuesday, while the same case surfaced in the Kerala High Court the following day.

Meanwhile State Forest Minister A.K.Saseendran, however, said not a single tree which is presently in the news was cut from forest land.

“The Forest department has not come out with any order giving permission to felling of trees. It’s the Revenue department which allowed such activity. I have already asked for a detailed probe into the role of forest officials in this,” said Saseendran.

However, former Revenue Minister E.Chandrasekheran, presently a legislator, said that it was based on the various requests from farmers that the initial order which came out in 2005 during the then Congress-led rule (which did not allow felling of rosewood and certain high value trees) here which he had tweaked in 2020, that allowed for all those having trees except sandalwood in revenue land can cut it.

“That order was given based on the requests of farmers and others who wanted it,” said Chandrasekheran.

” I seriously doubt if this order came out without the concurrence of Chief Minister Pinarayi Vijayan. The state government just cannot wash their hands and we demand a judicial probe into this case,” he said.