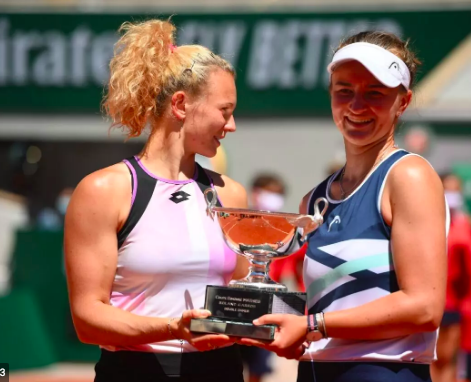 No.2 seeded Czech pair Barbora Krejcikova and Katerina Siniakova on Sunday clinched their second French Open women’s doubles title, beating No.14 seeds Bethanie Mattek-Sands of the USA and Iga Swiatek of Poland 6-4, 6-2 in the final here.

The final lasted one hour and 14 minutes at Court Philippe-Chatrier.

Barbora and Katerina have now won three Grand Slam women’s doubles titles in their careers. In 2018, they had triumphed here for their first doubles title and won the Wimbledon title the next month.

The last time a woman won the singles and doubles titles at any Grand Slam tournament was in 2016, when Serena Williams bagged both Wimbledon crowns.

Now, Barbora will become world No.1 on WTA doubles rankings on Monday.

“I’m just really happy. I’m really thankful to [Katerina] that she was there, that she was standing next to me. It felt a little bit easier than yesterday,” said Barbora.

“I’m just really happy that we have another title, and looking forward we’re going to continue with our cooperation in Wimbledon and also for the Olympics. I hope there’s going to be a bright future for us.”

Katerina echoed the feelings of her partner.

“Of course, I feel amazing. I’m really happy that we did it. I think we played great. We’re really communicating really well. I think it’s working,” Katerina said at the post-match press conference.