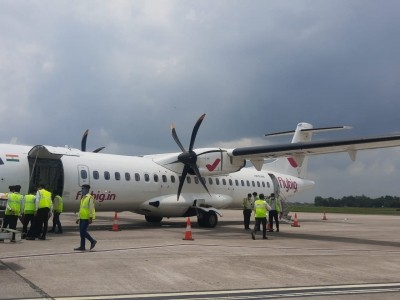 With a private airliner – Flybig – starting its operations in the new routes connecting Assam’s Guwahati and Dibrugarh on Friday, the air connectivity in the northeastern region further expanded under the Regional Connectivity Scheme-Ude Desh ka Aam Naagrik (RCS-UDAN), officials said.

Airport Authority of India (AAI) officials said that a flight of the private airliner Flybig on Friday started the direct flight services from Agartala to Guwahati and Agartala to Dibrugarh.

A water cannon salute was accorded to the first flight at the Maharaja Bir Bikram Airport, 20 km north of the capital city Agartala.

An AAI official said that the Flybig flight would operate three days a week (Monday, Wednesday and Friday).on these routes.

“The new flight operations in the new routes started at a time when the second wave of Covid-19 has impacted the Aviation industry badly and it would be a morale booster for other Airlines to expand their operations. This will also improve connectivity between Agartala and other northeastern states,” the official said.

He said that the RCS scheme under UDAAN would provide flight fares lower than the normal routes.

The Flybig last month had started its operation in the Guwahati-Pasighat (Arunachal Pradesh) routes under the RCS-UDAN scheme, which was launched by the Union Civil Aviation ministry in October 2016 to stimulate regional air connectivity and making air travel affordable to the common people.

The AAI is also developing the Hollongi airport in Arunachal Pradesh, boosting air connectivity in the mountainous areas.