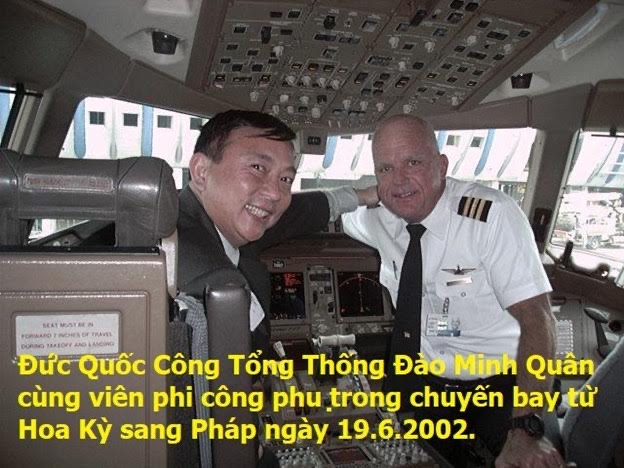 “I’m here today as a Prime Minister to the Provisional National Government of Vietnam (PNGVN) to share witness to the continuing struggle against the communist regime, both here where they are numerous & strong and in the homeland.

Wherever communists exist, the world is not stable, and for that reason, we must continually fight in the name of democracy, freedom, and our children’s future.

We will never forget and will always sincerely appreciate all those who have sacrificed for freedom & democracy, including all our soldiers (https://youtu.be/gA7lDnCWGKA).

He is IMPERIAL DUKE ĐÀO MINH QUÂN, who was elected Prime Minister of the Provisional National Government of Vietnam by the people representing three generations of Vietnam including Elderly, Middle-aged and the young in the 1990s and is now the president of the Republic of Vietnam with over 8 millions Vietnamese everywhere used the referndum system to vote. Since 1995, he has been living in TỤ NGHĨA ĐƯỜNG, 10800 Sierra Road, Adelanto, CA. 92301, where the Standing Office of the PNGVN is, for more than ten years until Congressman Gary Miller sent a delegation to invite him to attend the conference. Even being alone, he vows to devote his life to the struggle for democracy and freedom for humanity, including the Vietnamese and the Americans.

The one who has the blood of the Commander-in-Chief

He was born in Saigon, Gia Định province, in a pure Confucian family with a tradition of Generals. He inherited all the heroic qualities and intelligence from his ancestral line. The famous Commander-in-Chief, Imperial Duke Hưng Đạo Đại Vương Trần Quốc Tuấn (from his Father side) who defeated the Mongol Yuan invaders 3 times, and Tế Văn Hầu Nguyễn Trãi (from his Mother side), famous Names in Vietnamese history. His father, Mr. Đào Thế, was also an exemplary officer of the first parachute army of the Nation of Vietnam.

He attended the US Mike Force training course in Sơn Trà at the age of 16, and became a guide to help Mr. Ohman, an American war correspondent of the Associated Press, to go deep into the battlefields of the South. He witnessed with his own eyes the cruelty and fierceness of war and the cruel tricks of the communists.

He joined the army with the ARVN in 1970, the class 5/71 of Thủ Đức Infantry School with the Military ID # 72/140999 and served in the most dangerous place, the Quảng Trị Sub-Command, the Đông Hà military fire zone. He then became the Commander of the Public Service Command Company of the 122nd Battalion and proposed the establishment of the Black Tiger Reconnaissance Team, “Go Without A Sound, Return Without A Word”, to be assigned the Team Leader. Once, he captured Lê Duẩn, a vital oligarch of the Vietnamese Communists in the fall of 1972, implicitly making a vital contribution to the ARVN to break the re-occupation of Quảng Trị plan of the Communist army that year. His last rank was a Lieutenant.

By the time the Communist tank crashed down on the Independence Palace’s gate, completing the occupation of the South, he was one of the last ARVN soldiers who tried their best to defend the city, fighting to the last bullet. After escaping the 1st time on April 30th, he continued to fight and was finally captured on May 3rd, 1975. After escaping the prison then crossed the sea to Malaysia in 1979, then settled in the United States on August 14th, 1980. He immediately participated in the National Vietnamese movements to fight against Communism, in the capital of Vietnamese refugees in Southern California, at the same time to study and work. He soon became a successful person in charge in the highly competitive business and computer engineering environment in the United States.

As living in two societies, socialist and capitalist, he realized the imperfection of both ideologies, though they were opposite. When their ideology is developed to the climax, it will transform into each other’s vicious circle. It is time for people to enter the period of the Great Awakening to find the middle way towards spirituality and a way of life in harmony with nature and promote morality to reconcile all the negative aspects between the spiritual and material needs in a man. He introduced the NEW HUMANISM theory and proclaimed the New Democracy Era in 1987. This theory has already a practical foundation which was embryonic in the United States. He is the founder of the Vietnamese Youth and Students New Democracy Movement. He also established the centers to support American new immigrants to learn English, computers, and U.S. laws, making them easier to integrate into the new life in the United States.

This movement flourished in 1989–1990 when it supported more than 300,000 Vietnamese patriotic people worldwide to oppose the honor of Hồ chí Minh at UNESCO. Here, he was the person to request to compare the fingerprints of HCM corpses with the fingerprints of Nguyễn Ái Quốc to prove two people are one, are Vietnamese. However, the Vietnamese Communist authorities did not dare to do so, and the file of honoring HCM as a World Cultural Celebrity was cancelled. It was the first step that made him a prominent politician in the Vietnamese community, even among American politicians. In 1990, the U.S. Republican Party invited him to be a Member of the Host Committee.

From then on, the higher demand for political struggle and the saving of his compatriots led him to gradually abandon the business path to go deeper into the path of a politician, as the qualities of a Marshal inherent in him. Between 1990 and 1995, he sold off his assets to make a fund for 200,000 of his compatriots in the refugee camps in South East Asia (S.E.) to help them stabilize. He then helped 15,000 U.S. settlers and 185,000 compatriots repatriate under U.N. protection along with the CPA (Comprehensive Plan of Action) fund. He is the Vietnamese New Democracy Movement leader, who opened the Democratic Solidarity Congress to establish the PNGVN. After that, his compatriots from three generations (elders, middle-aged and youth) of Vietnamese from Overseas, at homeland and in the refugee camps in S.E., elected him as a Prime Minister with 65% of the votes.

A man who has infinite sacrifice, devotion and patience, to defend Democracy and Freedom permanently

He is a Vietnamese politician who had earned the trust of the U.S. ally when he was a Prime Minister of the PNGVN. The two Governments have begun to quietly implement bilateral plans to combat Communism’s expansion and intimidation. In order to undertake the “Empty Fort Strategy”, that is to allow the entrance to the U.S., for the Communists to slowly follow in the direction of freedom, democracy and human rights, as well as for them to invest in the democratic countries boldly, he had to accept hardship, sacrificed himself and retreated to Tụ Nghĩa Đường, hiding and waiting for 20 years. That was also the reason for his newly formed PNGVN to be moved to Tụ Nghĩa Đường (The gathering place of righteous heroes who worship God), Adelanto desert. Over time, human patience is limited, most of his comrades withdrew to return to their family, leaving him alone in the Tụ Nghĩa Đường. He was supported by the US government and the Union of 28 European countries, implementing anti-communism towards democratic countries. He warned President George H. W. Bush of the danger of communist encroachment, especially of China, on American society. Former US President Bill Clinton sent him diplomatic letters twice in 1994 through bilateral activities between the two governments. Through the two separate invitations from the U.S. Government, he attended the Republican Congress on July 5th, 2005, and spoke at the Nixon Library on October 15th, 2010 respectively, to announce East Sea sovereignty, including the Paracel and Spratly Islands, of Republic of Vietnam, (https://youtu.be/Xrk2exDuQpc). Apart from that, he also received diplomatic letters from the European Union. During his visit to Australia, Europe and Canada, he lobbied allied governments to recognize the PNGVN and the RVN’s flag, as well as advocated the Campaign of Signing to stomp on the face of Hồ Chí Minh to define the ideal boundaries between the liberal democratic bloc and the communist bloc. He also established the PNGVN representative offices in these countries and continents.

He and the experts of PNGVN established the most advanced and safe online Referendum system for the national and international people to be free, voluntarily to express their wish to elect representatives of citizens to eliminate Communism in Vietnam. According to the people’s wishes through more than 4 million Referendum votes, he revived the Third Republic of V.N. on February 16th, 2018, and was elected as the President on November 11th, 2018. The number of votes through the Referendum system is still increasing by the day, and now there are more than 8 million votes. On the other hand, he was honored with 30 years of community service by the U.S. State of California on April 30th, 2016, (https://youtu.be/oYCAzWaV91g)

At Tụ Nghĩa Đường, he erected steles to worship the Five General Gods, Unknown Heroes, and the Hexagon Monument to pay respects, gratitude and commemorate 58,721 American soldiers, including his comrades, who fought to defend for the cause of freedom and sacrificed their lives during the Vietnam War in the homeland before April 30th, 1975.

As a warrior of both the RVN and the United States and a living witness of the Vietnam War, he saw the root cause of this crime due to Communism’s expansionist policies. As he once warned the U.S. head of state through their various terms, this invisible creepy and frightening expansion. The reason is the nature of the communist party, which is very difficult to eradicate when it has formed a society, even if it is in a democratic society. He advocated the PATH OF SPIRITUAL REVOLUTION with the NEW DEMOCRATIC THEORY, HUMANITY’S PATH TO PEACE. It is a Spiritual Revolution that does not use violence but is fierce; it is a war between right and wrong, between good and bad, between righteousness and evil, between the righteous theists and the inhuman atheists. The battlefield of this Spiritual War is the MIND inside each of us. When we let wrong views or evil minds take over us, we bring demons into our house of consciousness. All things like hatred, jealousy, envy, greed, selfishness… are suitable prey to feed the enemies. Furthermore, the noble qualities inherent in each of us, such as wisdom, courage, bravery, responsibility, perseverance, humility, and compassion, are weapons against our enemies, nourishing nutrients and the gem of bliss in us.

He vowed not to stop this struggle until eliminating Communism in Vietnam and around the world. There are now the powerful forces, who are members of the PNGVN – 3rd RVN following his legacy whom he trained to become many of ĐÀO MINH QUÂN, resilient warriors in the spiritual revolution, bringing happiness, prosperity to society and preserving human ethics.