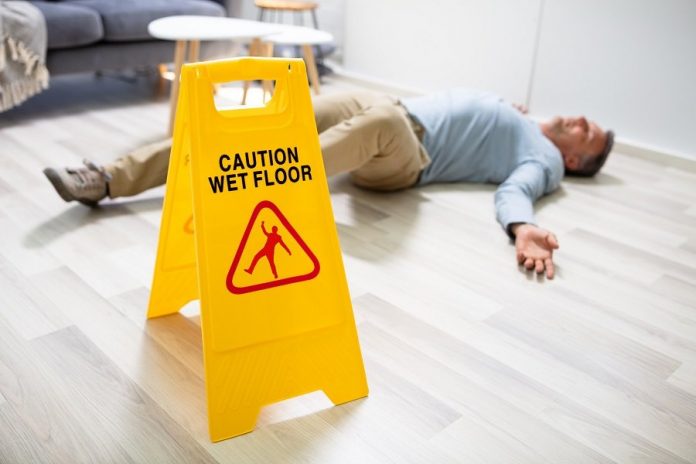 If you’re hurt in a slip and fall accident or a similar personal injury situation, you have legal options. You should pursue these so that your medical expenses and other associated losses are covered because you were hurt due to someone else’s action or even inaction.

In general, the following are the steps of a personal injury case, including the time it might take you to receive your settlement check if that’s the final outcome.

If you’re injured in a slip and fall accident, which is what this guide mostly focuses on, you would first need to file a claim with the liability insurance provider of the property owner. Then, the insurance provider, after they receive it, sends an adjuster. The adjuster’s job is to investigate the claim and the facts surrounding it and then negotiate a settlement based on what they find.

When you have a slip and fall claim or a similar personal injury claim, you’re working with the insurance carrier of the defendant, or more specifically, your attorney is.

An insurance company is a business like any other, so their primary priority is to reduce their own expenses, meaning they aren’t going to want to pay your claim if at all possible.

Insurance adjusters will try anything they can to avoid paying or to reduce how much they have to pay, so an attorney can help you navigate this often tricky process.

Showing You Were Hurt

One of the biggest parts of a successful personal injury claim is showing evidence that highlights you were hurt.

You need to have records, including photos and medical bills that demonstrate your injuries are linked to when you fell or had an accident.

You should have gotten medical care right after your fall or accident because waiting can derail your claim The insurance company will try to say that either you’re not as hurt as you indicate or that your injuries aren’t from your accident.

When you’re preparing to make an insurance claim, you should get all medical records and bills from anyone who treated your injuries.

In a slip and fall case or any type of personal injury claim, you will have to show that the person who’s insured is at fault for your injuries.

Negligence is a term you’ll probably hear. This means that someone did something that no other reasonable person would have done under the same circumstances.

Liability is a term that means legal responsibility.

Communication with the Insurance Company

Shortly after your slip and fall accident, either you or the attorney representing you will send what’s known as a notice letter to the insurance company of the at-fault party.

This lets the insurance company know that you plan to file a claim.

Your attorney should handle the communications from the insurance company. If you aren’t working with an attorney, all that correspondence will come to you.

It’s likely that either you or your attorney will get a Reservation of Rights letter. This letter is letting you know the company is going to investigate your claim, and they are also letting you know that they might deny the claim if they don’t believe your injuries are covered.

An insurance adjuster might call you and ask for a statement, and they could ask you to sign a medical release form. It’s a very good idea to talk to an attorney before doing either.

Calculating the Value of Your Claim

When you’re hurt in an accident, the losses are called damages.

There are damages you can measure, like your medical bills and your lost wages. Then, there are other damages that can be trickier to calculate such as pain and suffering and emotional distress.

Once you have a value for your injuries, you would send a Settlement Demand letter to the insurance company, which tells them what you think they should pay you. You’ll also attach any evidence.

Negotiations can be the most challenging and time-consuming part of the personal injury process.

An adjuster is going to try everything they can to settle quickly, but if you’re patient and persistent, you’re likely to settle for more.

Before you start negotiations you should have a bottom line in mind, although, of course, you wouldn’t say this to the negotiator. This is the absolute minimum you would accept.

Once You’ve Reached a Settlement

After negotiations, when you’ve reached a settlement, you may be anxious to get the money.

The settlement process can be a bit trickier than simply getting a check, however, and the specifics depend on your state.

Once a settlement is reached, you’ll sign some forms. If you’re working with an attorney, they’ll go over these very carefully. There may even be some more negotiations about the settlement terms.

You should also review everything before signing it.

Then, the insurance company gets your release forms that are now signed, and they will process them.

Your attorney will deposit the check into an escrow account or trust, and this is required by most states. Once the check clears, your attorney distributes your settlement.

If there are any unpaid debts, your attorney will have to settle those. For example, you might still have unpaid medical bills.

Your attorney will also take out their fees from your settlement. Personal injury attorneys are usually paid a percentage of whatever you settle for.

Finally, at that point, you receive your portion of the settlement.

While the process to reach a settlement can take months or even years, once you do settle, you should receive your funds in about six weeks. There can be delays often due to factors like clerical errors, so if it takes longer than six weeks, you should speak to your attorney.

It’s a time-consuming process that requires a lot of patience and organization, which is why having an attorney on your side throughout it can be so helpful.