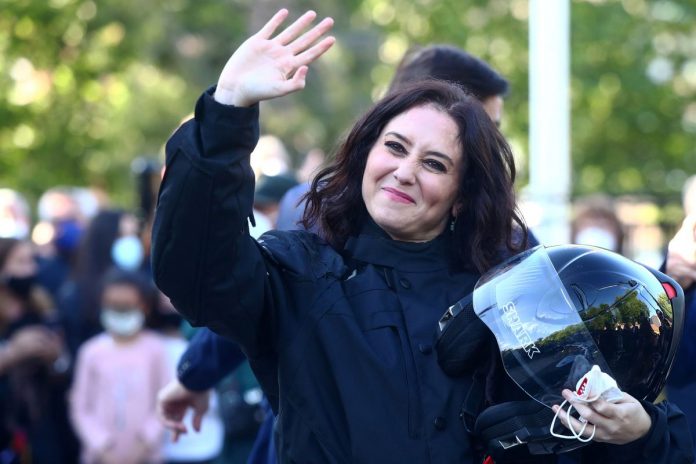 Voters in the Madrid region look set to back their conservative governor in an election on Tuesday after she defied pressure from Spain’s leftist central government to lock down the economy and let bars and shops stay open despite the COVID-19 pandemic.

The decision of Isabel Diaz Ayuso, from the opposition People’s Party (PP), to prioritise the economy and social life over keeping a tight rein on COVID has pleased many Madrilenos, known for their sociability and love of eating and drinking out.

“This election is a referendum on the COVID restrictions,” said the head of pollster GAD3, Narciso Michavila.

Ayuso, 42 and a maverick even within her PP, has the word “Freedom” emblazoned on campaign posters as she seeks to project an image of Madrid as a liberal haven, luring tourists from other European countries which have been locked down for months – though this has come at a price of higher COVID infections.

“Ayuso did well with the issue of the bars, giving more freedom and preventing (economic) chaos,” said student Lucas Oliveira, 21, enjoying a drink at an outdoor terrace. He considers himself apolitical but will vote for the PP candidate.

Posters saying “Thanks for taking care of us” have blossomed in bars and restaurants, allowed to stay open since the end of a tough national lockdown last summer, highlighting the popularity of Ayuso’s policy in the crucial hospitality sector.

Gyms, cinemas, theatres and museums have also remained open, and people can even eat indoors in restaurants. However, people from other parts of Spain, mostly still under varying degrees of lockdown, are not allowed to visit the capital.

Spain’s regional administrations are responsible for issues such as health and education.

The Madrid region, home to some seven million of Spain’s 47 million people, recorded 388 COVID-19 cases per 100,000 in the last 14 days against a national average of 230. Occupancy of intensive care units is also the highest in Spain, at about 44%.

For some voters, that price is too high.

“For the economy I thought it was good that the bars were allowed to reopen… But (Ayuso) has gone too far leaving so many things open”, said Isabel Villalba, a 67-year-old pensioner, who said she would vote for the Socialists.

But the Madrid region, Spain’s wealthiest, has avoided a full-blown health crisis, and Ayuso’s PP is projected to win more than 40% of the vote, potentially doubling its seats in the regional assembly from the last election in 2019.

Though unlikely to be sufficient to allow the PP to govern alone, such a result would be noteworthy in a country long bedevilled by political fragmentation and would boost Ayuso’s prospects as a potential future rival for both her party leader Pablo Casado and Spain’s Socialist Prime Minister Pedro Sanchez.

Opinion polls suggests Ayuso is likely to need the support of the far-right Vox party, which had also backed the region’s outgoing centre-right coalition.

If Vox fares poorly and Ayuso cannot find support elsewhere, there is a slim chance that left-wing parties could jointly garner enough votes to clinch a surprise victory.