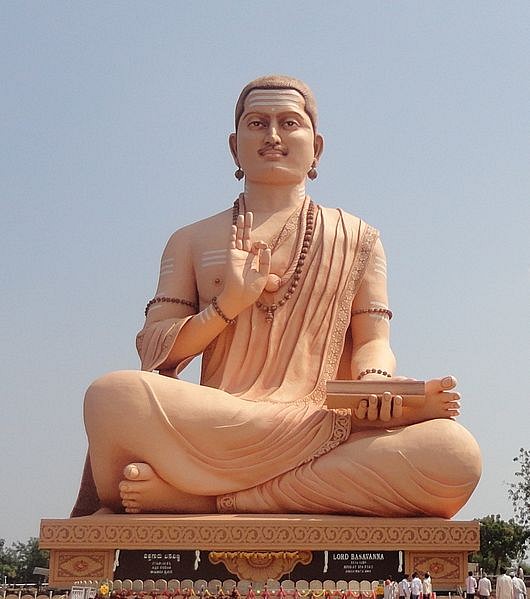 My actions are contrary to what I speak, I am not truthful & honest. If I follow up my good speech with good actions, then the god will bless me quotes Mahatma Basaweshwar who was a social reformer and spiritual revolutionary leader who also worked as Prime Minister for Kalyani Chalukyas in 12th Century.

Basava was born in Bagewadi of Karnataka to Shaivite parents who named their son after the vehicle of shiva Basava, many believe that Basaweshwar was the incarnation of Nandi. Being a revolutionay he didn’t perform sacred ritual – Upa naina to be qualified as Dwija but at the same time he wasn’t an atheist but a staunch devotee of Lord Shiva.

Basava was very keen to bring reforms in Hinduism to get rid of social evils. The social and cultural conflicts which were very common in India from ancient days were stimulating a new initiate within the Hindu society.

The Contemporaries of Basava were apologists who had been giving a new interpretation to the irrational religious practices and imposed blind faith upon masses. But Basava with great courage has ridiculed every such practise and gave new direction to the Shaivite movement in Southern India.

The Philosophy of Basava has brought Anubhava Mantapa into a reality. It is a platform where everyone irrespective of caste,creed,religion,gender and also most qualified scholars, intellectuals and uneducated masses discussed various issues from religion to philosophy.

Many other people who backed Veerashaivism like Akka Mahadevi, Channabasavanna along with the scholars from Jainism also shared the stage in Anubhava Mantapa. The Humanity is restored in these meetings where aspirations of common man were heard and the most genuine efforts were put to resolve the contradictions though propagating Human values.

This is in fact stood as symbol of Ancient Democratic temple that served humanity brought in socio spiritual revolution and abandoning evil practices to some extent.

The teachings and preachings of Basava are universal that focused with Humanity and compassion to bring a wave of change among masses and the nature of inclusiveness made it more relevant in modern era.

There is no hell or heaven somewhere else, the hell is right here, when you are dishonest. The heaven is right here when you conduct yourself with honesty and truthfulness. This quote resembles the spirit of SPIRITUAL REVOLUTION which gives space to every individual to worship and also contribute to the society

Kayakave Kailasa which means work is worship is still relevant in Post modern era where the identity is put to scrutiny and dignity to work has to be restored.

Basava being a Poet, Statesman, Influencer and devotee of Kudala Sangama tried his best to bring the change what he saw and his teachings will still serve the purpose to bring egalitarian society amidst the Globalisation and changing life style.