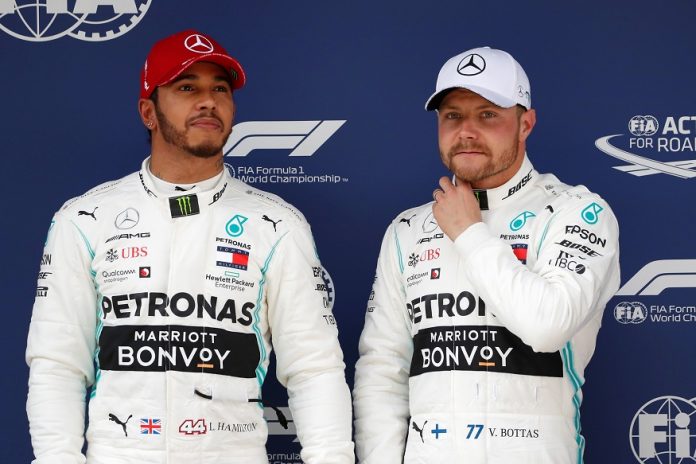 Lewis Hamilton missed a 100th career pole position by just seven-thousandths of a second against Mercedes team-mate Valtteri Bottas in qualifying for the Portuguese Grand Prix on Saturday.

Bottas clocked 1 minute 18.348 seconds around the 4.684km Autodromo Internacional do Algarve for his first pole of the season and 17th overall, with Hamilton on 1:18.355, DPA reports

Red Bull’s Max Verstappen had to settle for third ahead of his team-mate Sergio Perez, after having the fastest lap in Q3 wiped out for exceeding track limits and then not being perfect in his final stint where he also ran into traffic.

Sunday’s race promises another exciting duel between the two teams with Bottas the third pole-sitter in as many races, after Verstappen in Bahrain and Hamilton in Imola.

“I am really happy that we have made this step forward. It is a good start,” Mercedes motorsport chief Toto Wolff said.

Hamilton struck a similar note by saying: “A great job by Valtteri and our team for us both to be on the front row, it was not expected. We have to be happy for that, it was not the perfect lap but I gave it everything.”

Bottas said: “It’s a good feeling to be on pole. It’s been a weak point for me in the first two races.

“Starting with the medium tyre tomorrow is good, and it opens up opportunities that we can go as long as we want in the first stint. We need to focus on the race start and then go from there.”

Verstappen, whose car appeared superior in the first two races where he came second and first, was clearly disappointed.

“I was quite confident we could still do a good final lap but the last sector, the car in front just disturbs you. It cost me a lot of lap time, but it is what it is,” he said.

Hamilton leads Verstappen by one point in the championship in what could be season-long title duel.

Former world champion Sebastian Vettel reached the final 10-man Q3 shoot-out for the first time with his new team Aston Martin and the first time in 16 races since the 2020 British Grand Prix.