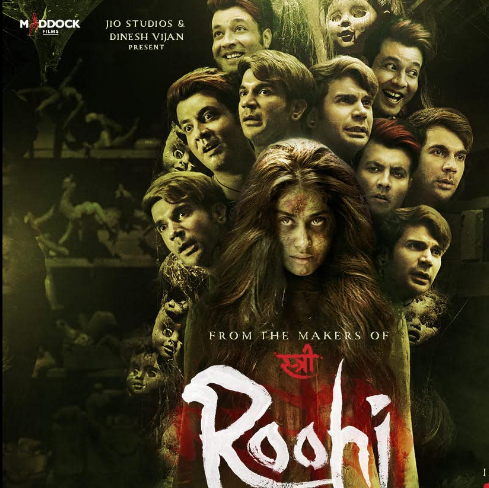 All throughout the movie, we see a feminist is trying to be banished from the body it is trapped in. Horror movies are made to take our breath way for the better or worse. The essence of horror movie lies with the characters and how they portray it, because somewhere along the line the story of every horror movie is almost same.

The main motive of the horror genre is that the impact stays for a long time. The audience will actually get scared at night thinking about the movie. The director of the movie ‘Roohi’ were Mrighdeep Singh Lamba and Gautam Mehra who perhaps believed in taking a long route to reach the cinematic climax.

There are definitely entertaining intervals of sense of humor but they still don’t fill up the gaps of an unimpressive plot. The movie has been stretched and it seemed like the writer is trying to fill in the holes. Although the movie was women centric but the lead heroine was not given much space on the screen. Maybe the ending does give her some space but the movie should have still had few proper shots with her. Although whether it would compensate for the lack of her character’s screenplay or not is questionable.

The movie begins with Bhawra and Kattanni, the two male leads, showing a foreign journalist a ritual of their village. In the ritual if the man has his eye on a certain woman, she is abducted and married off to the man. This absurd practice had been going on in the town of Uttar Pradesh from quite some time and almost every second bride has gotten married by this ritual.

Strangely, none of the women looked like they were against the practice, they were all comfortable with whatever had happened with them but the intent of the movie was not to belittle women. The male protagonist is actually a wannabe reporter but also does the job of picking up women.

Now the female lead called Roohi is one of the women to be abducted. Bhawra falls in love with her at first sight. Later they learn that Roohi is possessed by an evil spirit who will only rest when she is married. The other protagonist Kattanni falls in love with the spirit who is inside Roohi. One protagonist wants to get the spirit out of Roohi and the other one wants to let her stay inside.

The director rightly intends to show from this movie how it has been prevalent in society that the women will be liberated only when she is married to a man. Marriage is the ultimate goal for every woman. Look no further than Bollywood films and shows that have, for decades, shown us that for every girl the dream of her wedding is the most important thing and she starts planning for it since her childhood. They show how the hero saves the damsel in distress and then gets married to her.

Some parts of Roohi are genuinely funny without a doubt (spoilers ahead in this paragraph) – my favourite episode being the one in which Kattanni tries to mimic the exorcisms he has seen in Hollywood films by spouting lines often delivered by Christian priests in those stories and touching what he describes as a “plus sign” to Roohi’s forehead.

I’m not entirely enthusiastic about the movie and I feel it could have been a lot better. The female lead was not given enough attention except her spot-on makeup but again, her acting didn’t entertain me much either.

The best part about the movie is the motive and the message it tries to bring to the screens, I wish they’d showcased it more impressively.

The start cast of the movie has Rajkummar Rao as Bhawra Pandey who can go to any extent to get Roohi back, Varun Sharma as Kattanni Qureshi who falls in love with the spirit inside Roohi, Janhvi Kapoor as Roohi/Afza. Alexx O’neil plays the reporter who looked as astonished as the public might have been after seeing the ritual of abducting women for marriage. Manav Vij is seen as the Bhawra and Kattanni’s boss, Sarita Joshi as the old woman (budhiya) who herself was a mudiyaperi chudail (spirit) who understands Roohi’s plight.

The movie is a one time watch and definitely drags on after the interval – in all honesty with no offence to the filmmakers/crew/cast, if you don’t have enough spare time, you can give it a miss. I would give this film a 2.5/5 rating.