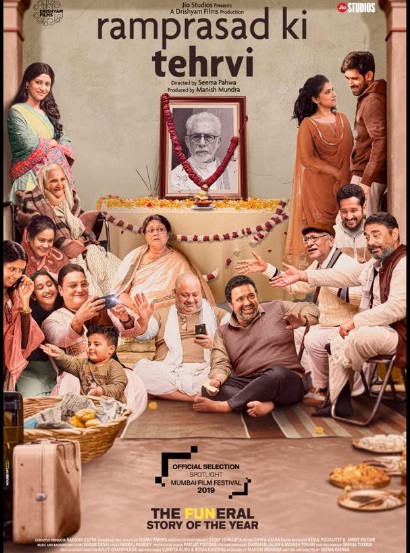 Family traditions and values have been the core of the Indian families. We have different traditions and rituals when the child takes birth and when the soul departs. Bollywood has always made movies in contrast with some other existential values of the Indian Family System. It plays a huge role in determining the essence of the Bollywood movies.

We see one such movie which is packed with Indian values and the vibrancy of a joint family. Seema Pahwa has always brought for us something quirky with a wonderful message. In this movie, she brings the pleasantry of a middle class family which resides in Lucknow and why they have chosen to stay together for 13 days.

We are all familiar with messy North Indian joint families – they thrive on Drama. The story begins with Ram Prasad coughing and asking a child to play the piano properly, which he wasn’t able to despite trying his hand on the tune multiple times. What he didn’t know was, that was the last night for Ram Prasad.

He dies and mayhem soon follows. He had been a father to four sons and two daughters, now that he is dead, the last rites are to be performed as per Hindu mortality traditions in India. To perform them, the whole family has gathered in their old house where all the kids have grown up. Now the house, which once heard only the voice of Ram Prasad and his wife, is bustling with multiple activities happening at once.

Hence, the significance of 13 days, or better known to Indians as “Tehrvi” in Hindi – a ritual of death for the soul’s tranquil transition. Now for 13 days, everyone has to be together to perform all the final rites of their father. But, there are moments of serenity in the chaos that is happening in the house. The sons and daughter respect their mother but somewhere down the line they have issues with what their parents could not do for them. It also forms the foundation for how the children grew up so fast, move out to raise their own individual families, how they are not able to meet in festivals and how there are fights whenever they do.

The twist comes when a loan Ram Prasad had borrowed, appears in front of his children. The sons are not able to fathom why the father took so much of a loan, what need had aroused? There is a beautiful shot where the wife takes out the diary of her deceased husband and gives it to the elder son and he reads aloud how all the money had been given to the sons. This scene tries to show the sacrifices that every parent makes for their children and how some of them might be ungrateful about it.

The movie is a chamber drama showing a gentle-sharp drilling of family politics, the ties-of-blood that get diluted with time but can also be bold as red when the time comes. The director has acutely showcased the small scenes of very regular chaotic households which do not make the viewer loose relevance from the film.

There are times in the movie when we feel we could have been there too, in those exact situations. I found the cutting projection and the good-natured teasing turning into something pricklier, the quality which makes this kind of film stand out, dissolving a little. But then the director sweeps them up together and we are back to being witnesses, amused and bemused, all at once.

At the end, when the sons show their ungratefulness and unwillingness to help their mother, she decides to take things into her own hands and begins the second innings of her life.

She starts a music school in the name of her late husband, and she does not do it to repay the loan alone, she does so out of her own passion.

The director has chosen the cast very carefully with Naseeruddin Shah as Ram Prasad and Supriya Pathak as his wife who compensates for her lack of dialogue in the script with highly impactful expressions. Manoj Pahwa plays the role of the eldest son who’s son happens to be indulged in an affair with the neighbour whilst eyeing his aunt. Ninad Kamat, Vinay Pathak, Parambrata Chattopadhyay are the second, third and fourth son respectively.

Vikrant Massey as the eldest son of the Manoj Pahwa who falls for his aunt and Konkona Sen Sharma as the wife of the fourth son who fights her way to become an actress in Mumbai bring light to the screen.

Overall I would give a 3.5/5 rating to the film, it is not too heavy and not a bad watch. The movie is quite next-door, something regular – but the creation and performances bring the impact to our screens.