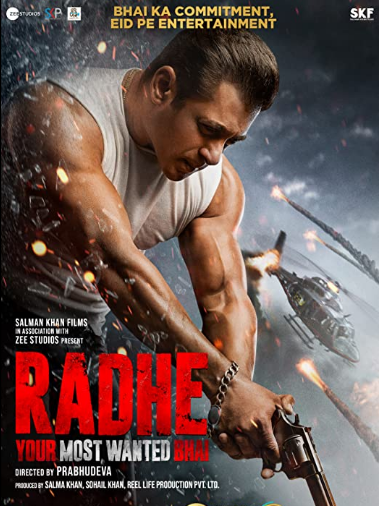 The City of Dreams, Mumbai, is known for its drug and mafia connections. Worlds biggest crime masters have gotten on top of their careers from Mumbai. Teenagers falling prey to substance abuse is also due to these gangs that work in every part of the city. Several writers from Bollywood often use these stories to create movie plots. Making movies out of these real drug-mafia stories is not new in the film business, Radhe being one of them.

The movie begins with a scene of drug abuse by teenagers and the police losing its grip over the mafias. They do not know how to control the drug issue among the youth and when they are not able to find a solution, they decide to ‘clean up the city’.

The storyline of the movie is quite similar to all the other mafia movies. We might not even have to take a double look at the South Korean version of this movie called The Outlaws which released in 2017 to spot the plot inspiration. Radhe is the story of a cop who goes by the same name. The cop is on a mission to eliminate crime with no regards to the law; he has his own methods. The cop has to track down Rana who has a motive to destroy the city.

Radhe is a complete masala flick with the same old story line. The entry of Rajveer who is very lovingly called as Radhe might make the superhero call Salman Khan for his autograph. We might not need superheroes to save the world since we have Radhe in our lives, sarcastically speaking. Radhe’s reputation paves the way for his arrival. Radhe has done 97 encounters and he has been transferred for 23 times. The movie can get a little messy with bizarre action scenes that go against the laws of science which can make even Sir Newton question his physics. But for Salman Khan fans, the entry could be clap worthy.

Since the theatres have remained closed in many parts of the country. The movie have been launched on the OTT platform ZeePlex and as usual it came to our screens on the day of Eid.

Radhe is a bold cop and he has always finished whatever task he has taken in his hands. This role was purely meant for Salman Khan which he effortlessly essays.

The leading lady Dia has a strange role in the movie, she believes that Radhe is aspiring to be a model. She starts giving him suggestions for modelling and body language. Dia seems to be a stereotypical yet regressive character who’s cute but somewhat a bimbo. Megha, Akash and Bharath are given the background as young cops. Megha at least gets two scenes to make her presence be felt.

There is no eye catching storyline to the film and not much to look out for barring the role of Rana. He is indefinable and a rough nut to blow, even for Radhe. Rana slashes anyone hindering his path. But their face-off, particularly in the segment before the interval, falls flat. Even the cat and mouse game between Radhe and Rana is not enough to keep us bound to our seats. One can be reminiscent of several Tamil and Telugu masala films that have gotten these pre-interval clashes right however boring or hackneyed the storylines might have been.

The movie is a little over hyped in my opinion. It lacks a grip over the viewer’s mind and is definitely missing good acting from the actors on screen. There are several unnecessary songs too. The character of Jackie Shroff in the entire film is still a big puzzle to me.

Radhe has Salman Khan in the lead role of Radhe the super cop, Randeep Hooda as Rana the Mafia and Disha Patani, who seems to enhance the role of the main lead as her single purpose. Jackie Shroff and Gautam Gulati contribute to the screen as well.

I would give this film a 2/5 rating. The movie is lazy, lacks a lot of cinematic appreciation but is good to watch with family. The movie is a one time watch and has pulled a few comical scenes, if you have lots of time to spare in the pandemic you can give it a shot.