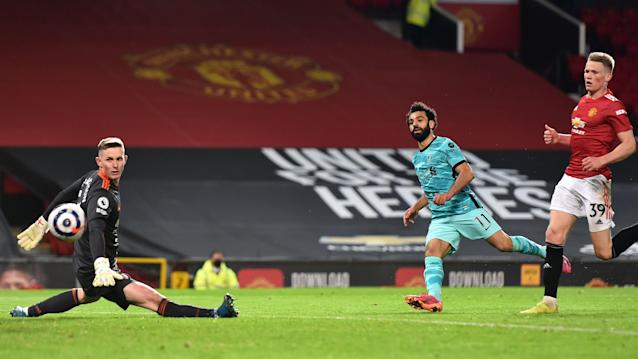 (IANS): Jurgen Klopp tasted victory at Old Trafford for the first time as Liverpool breathed new life into their top-four push with a thrilling 4-2 win in the rearranged fixture against Manchester United.

After anti-Glazer protestors got into the ground and onto the pitch 11 days ago, further demonstrations could not stop Thursday’s Premier League fixture going ahead in Old Trafford’s final match behind closed doors, DPA reported.

United missed this chance to all but end Liverpool’s Champions League qualification hopes as their fourth match in eight days ended in a first home loss to their bitter rivals since 2014.

Stand-in skipper Bruno Fernandes’ deflected effort had got Ole Gunnar Solskjaer’s side off to a dream start, only for Diogo Jota to level with a smart flick after a penalty decision was overturned.

Liverpool pulled further ahead 72 seconds after half-time as a comedy of errors at the back ended with Firmino turning home his second of the evening.

United looked punch-drunk but eventually rallied as Marcus Rashford reduced the deficit, before Nat Phillips – who had deflected home Fernandes’ opener – cleared a Mason Greenwood attempt off the line.

Mohamed Salah ensured United would lose their sixth home league game of the season, racing through at the death as Liverpool moved into fifth and four points behind Chelsea with a game in hand.

Also on Thursday, Everton’s European hopes suffered a blow after a limp 0-0 draw at Aston Villa.

The Toffees failed to find the win which would have kept the pressure on the Premier League’s top six.

They climbed to eighth, above Arsenal, to move two points behind fifth-placed West Ham, but Everton’s inconsistencies look like costing them a European spot.

Ben Godfrey and Dominic Calvert-Lewin were denied by Emi Martinez, while Tyrone Mings wasted a rare opening for Villa.

The game at least represented a return for Villa skipper Jack Grealish, who ended his three-month injury lay-off as a second-half substitute.

The skipper was unable to conjure a winner, though, as the hosts remain 11th with three games to go.