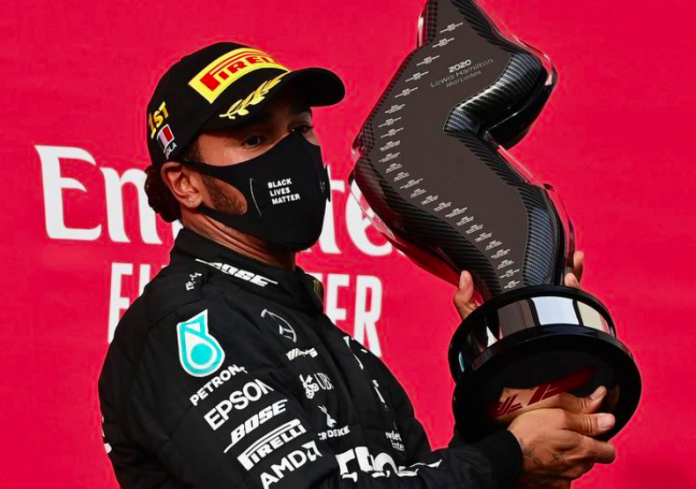 This was Hamilton’s third win this season and 98th of his career, and he also matched Michael Schumacher’s record of most Spanish Grand Prix wins with six triumphs each, reports DPA.

“I feel great after this, I feel like I could go “gain!,” the seven-time world champion said.

Verstappen settled for second place with Hamilton’s team-mate Valtteri Bottas in third. The Briton leads the drivers’ championship with a 14-point advantage over Verstappen.

Sitting on pole position for the 100th time in his F1 career, Hamilton was overtaken by Verstappen at turn 1 on the opening lap.

Hamilton had the chance to recover his position after the safety car came in, following Yuki Tsunoda’s sudden stop due to an engine problem in his Alpha Tauri, but wasn’t successful.

Red Bull’s Verstappen retained position after the first round of pitstops but Hamilton was flying on his new set of tyres, cutting the gap to Verstappen down rapidly.

Mercedes opted for a two-stop tyre strategy and Hamilton dropped to third, behind Bottas. But he managed to overtake the Finn and then reach Verstappen, using DRS to slot past the Dutchman.

“I was hunting, I was so close so I wasn’t sure I could make the tyres last so it was a gamble but a great strategy by the team,” Hamilton analysed.

Conceding defeat, Verstappen made a final pitstop for fresh tyres and secured the point for the fastest lap.

“When they went for another stop, I knew it was over – I was already struggling with the tyres,” Verstappen said.

“They had more pace in their car, even if we’d gone for that second stop, I’m not sure … I did everything I could,” he added.

Ferrari led the midfield pack with a fourth place for Charles Leclerc, who at times saw himself in a podium position. Team-mate Carlos Sainz finished seventh, behind Red Bull’s Sergio Perez and Daniel Ricciardo of McLaren.

Other McLaren driver Lando Norris, Esteban Ocon of Alpine and Alpha Tauri’s Pierre Gasly completed the top 10. Gasly put up a great performance to overcome a five-second time penalty and finish in the points.

Next stop is the traditional Monaco Grand Prix in Monte Carlo on May 23.