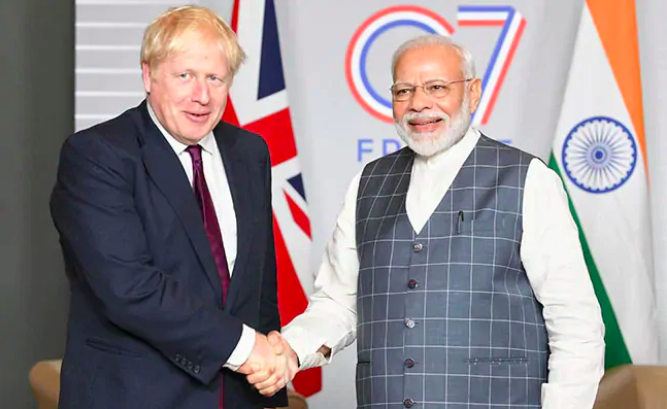 India and the UK on Tuesday agreed on urgent action to tackle climate change through new, shared commitments during leader-level call.

Prime Minister Narendra Modi and his British counterpart Boris Johnson signed off on a new shared roadmap during their virtual meeting that includes measures to help limit global temperature rises and support the communities most vulnerable to the impact of climate change.

They also reaffirmed their personal commitment to work together for an ambitious outcome at the COP26 climate summit in November and sustained action beyond.

Responding to the meeting, COP26 President-Designate Alok Sharma said: “The UK and India share a longstanding partnership and I am greatly encouraged by the steps we have taken today to bolster our joint efforts on tackling climate change.

“If the world is to become net zero by the middle of the century and keep 1.5 degrees in reach, everyone must work together to make real change for a cleaner, greener planet.

“I am proud of the close collaboration on this crucial issue which our two countries have forged, especially during this very difficult time for India as it battles against Covid.”

The roadmap sets out an ambitious agenda for UK-India collaboration on fighting climate change, including a new partnership on clean energy transition, which will drive progress on development of renewables like offshore wind, improved energy efficiency and storage, and advances in electric mobility.

Both the countries also committed to collaborating on green hydrogen.

Both agreed to jointly launch a new global Green Grids Initiative at COP26 for countries to work together on interconnected grids for renewable energy, to help deliver India’s vision of One Sun One World One Grid.

Joint action through the Coalition for Disaster Resilient Infrastructure (CDRI), which the UK and India co-chair. This will support Small Island Developing States to prepare for the impacts of climate change by bolstering their infrastructure.

Also positioning the UK and India as global leaders on biodiversity through strengthening collaboration to protect and restore nature, including through a new joint partnership on forests.

This will strengthen how both the nations share expertise and information and accelerate a global transition to more sustainable supply chains by bringing together producer and consumer countries of forest risk commodities to share ideas and take action.

The two sides will explore the possibility of enhanced partnerships with major private finance leaders, including with the Climate Finance Leadership Initiative, to mobilise both public and private finance for green development.

A new phase of collaboration on the India Energy Security Scenarios Calculator initiative, to support climate policy and planning.

The roadmap will pave the way for a deeper and stronger engagement over the next ten years in the key areas of people-to-people contacts, trade and economy, defence and security, climate action and health, the Prime Minister’s Office (PMO) said in a statement.

The decisions were taken in a virtual summit attended by Prime Minister Narendra Modi and his British counterpart Boris Johnson — a move ahead as both the countries already enjoy long standing friendly ties and share a Strategic Partnership underpinned by mutual commitment to democracy, fundamental freedoms and the rule of law, strong complementarities and growing convergences.

The two leaders also discussed the Covid-19 situation and ongoing cooperation in the fight against the pandemic, including the successful partnership on vaccines.

PM Modi thanked PM Johnson for the prompt medical assistance provided by the UK in the wake of the severe second wave of Covid-19 in India.

Johnson appreciated India’s role in extending assistance to the UK and other countries over the last year, including by way of supply of pharmaceuticals and vaccines.

The two Prime Ministers launched an ‘Enhanced Trade Partnership’ (ETP) to unleash the trade potential between the 5th and 6th largest economies of the world and by setting an ambitious target of more than doubling bilateral trade by 2030.

“As part of the ETP, India and the UK agreed on a roadmap to negotiate a comprehensive and balanced FTA, including consideration of an Interim Trade Agreement for delivering early gains. The enhanced trade partnership between India and UK will generate several thousands of direct and indirect jobs in both the countries,” the statement said.

The UK is India’s second largest partner in research and innovation collaborations. A new India-UK ‘Global Innovation Partnership’ was announced at the Virtual Summit that aims to support the transfer of inclusive Indian innovations to select developing countries, starting with Africa.

Both sides agreed to enhance cooperation on new and emerging technologies, including Digital and ICT products, and work on supply chain resilience. They also agreed to strengthen defence and security ties, including in the maritime, counter-terrorism and cyberspace domains.

Both Prime Ministers also exchanged views on regional and global issues of mutual interest, including cooperation in the Indo-Pacific, and G7. They reiterated commitment to climate action to achieve the goals of the Paris Agreement and agreed to closely engage in the run up to CoP26 hosted by the UK later this year.

India and the UK launched a comprehensive partnership on migration and mobility that will facilitate greater opportunities for the mobility of students and professionals between the two countries.

Modi expressed his desire to be able to welcome Prime Minister Johnson in India as per his convenience after the situation stabilizes. PM Johnson also reiterated his invitation to Prime Minister Modi to visit UK for the G-7 Summit.