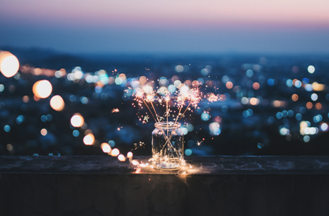 You love watching the fireworks displays during holidays, sports events and other exciting occasions — but you always struggle to give names to the brilliant displays you see in the sky. Well, struggle no longer! Here is every type of firework you can purchase or view, explained:

Some of the most common and most popular fireworks, firecrackers pop and flash on the ground in a relatively small and contained pyrotechnic display. You can buy individual firecrackers or strings of firecrackers in various lengths. Firecrackers are good for a fireworks beginner, but kids should always be supervised around them because firecrackers still explode and can cause burns.

Smoke bombs pop once and release a cloud of smoke, which can take on all sorts of fun hues. Though smoke bombs themselves don’t put on a particularly exhilarating show, they are a fun addition to a ground-based fireworks display and can add ambiance to other aspects of a celebration, like a photoshoot.

This broad category includes a variety of fireworks that are formed into fun shapes and produce unique effects when ignited. For example, you can find firework tanks, firework eggs, firework snakes and more. Generally, novelty fireworks are small and relatively harmless, so they are appropriate for celebrations with kids.

Mimicking the dancing droplets of water fountains, firework fountains shoot sparks up and out in graceful arcs. Fountains tend to be quick, relatively quiet and even cleaner than other types of fireworks, making them an excellent option if you want a low maintenance but beautiful pyrotechnic display.

The first fireworks ever invented were a type of sparkler, which is held in the hand as it burns. Sparklers are excellent to give to little kids (under supervision, of course) because they are exciting to wave around but will fizzle out quickly without much risk of harm. When buying bulk fireworks, it is a good idea to pick up plenty of sparklers, as they tend to be a simple, cheap crowd favorite.

These tiny fireworks are small and bottle-shaped with a string attached, which, when pulled, results in a pop and the release of some confetti. Also kid-appropriate, poppers and snaps don’t have enough explosive material inside to do damage to the person using them or their surroundings.

Roman candles shoot out balls and sprays of colorful light in a loud and fun explosive show. While some people like to hold roman candles as they fire, this is not advised by pyrotechnic experts because the candle could misfire and explode, causing injury.

Taking the traditional form of a firework – with a cone-shaped top and a cylindrical body — missiles and rockets shoot into the sky before creating a small explosion. Parachutes do the same, except they include a small plastic parachute to carry a piece of the firework, like a toy, safely to the ground for kids to collect.

When you think of a fireworks show, you are almost definitely thinking of aerial repeaters. Also called aerial cake fireworks, these pyrotechnics shoot high into the sky and explode in the huge, colorful bursts of light and sound that typify most fireworks experiences. Repeaters are packaged together in sequence, so you only need to light one fuse and stand back to watch the show. Some examples of fireworks that are usually contained inside aerial cakes include:

There are so many pyrotechnic options available, and more are being invented and released every year. Now that you know what different fireworks do, you can assemble an evening of fireworks perfect for you and your loved ones.