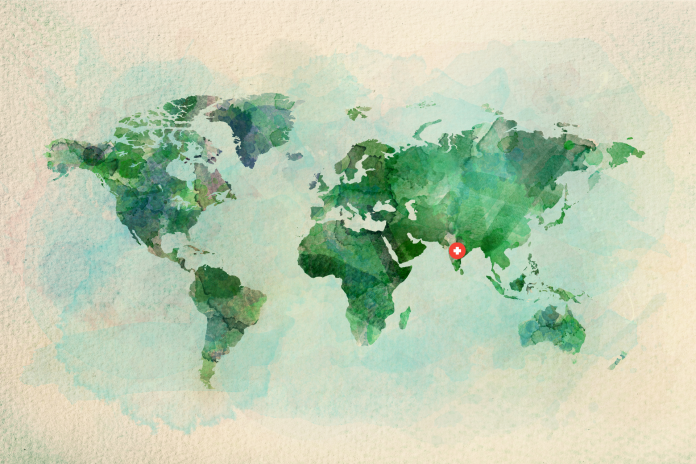 Nations across the world have come forward to help India in its fight against the raging second wave of the coronavirus pandemic, which is extremely virulent and has ravaged the country in the past few weeks.

As per official sources, the US, the UK, France, Ireland, Australia, Germany, Saudi Arabia, Singapore, Hong Kong, Thailand, the UAE, Kuwait and Russia have assured medical aid to India with much of the support on its way.

France is sending relief material in two phases. In the first phase, eight large oxygen generating units that can be installed quickly, liquid oxygen, 28 respirators and their consumables and 200 electric syringe pushers are arriving this week. In the second phase, five liquid oxygen containers will arrive next week.

Sources said that Germany is sending a mobile oxygen production unit which will be made available for three months along with 120 ventilators and 80 million KN95 masks.

Kuwait and Russia have also committed to send medical supplies.

Some of the medical supplies are also coming through private channels from various countries. For example, Singapore is sending 500 BiPAPs, 250 oxygen concentrators, four Cryogenic oxygen containers and other medical supplies.

Over 250 oxygen cylinders were ferried by Singapore Air Force’s C-130 transport aircraft, he added. The consignment was delivered to West Bengal, a statement from the high commission said.

Aid from Russia, too, was to reach within 24 hours, he said, adding that Prime Minister Narendra Modi had spoken to Russian President Vladimir Putin on Wednesday amid reports that the first batch of Sputnik vaccine will be arriving within days.

After US President Joe Biden spoke to Prime Minister Narendra Modi over phone on Monday, the US has committed to provide a range of emergency assistance, including oxygen-related supplies, vaccine materials and therapeutics.

This would include 10,00,000 Rapid Diagnostic Tests (RDTs), the same used by the White House, to provide reliable results in less than 15 minutes to identity the virus and prevent community spread.

The first consignment on the world’s largest military aircraft would bring 440 oxygen cylinders and regulators donated by the State of California, plus 9,60,000 Rapid Diagnostic Tests and 100,000 N95 masks for the India’s frontline healthcare teams.

“The US has stood shoulder to shoulder with India for more than 70 years and will continue to fight the COVID-19 pandemic together. Just as India sent assistance to the United States when U.S. hospitals were strained early in the pandemic, we are now helping India during its time of need,” said the spokesperson.

The latest announcement builds on USAID’s earlier assistance of over $23 million which directly reached 10 million Indians, and it now delivering supplies worth over $100 million in the next few days to this country.

Among the materials being sent are 1,100 refillable oxygen cylinders with more to arrive later for hospitals, 1,700 medical oxygen concentrators for 320 primary healthcare facilities, Oxygen Generation Units which can support upto 20 patients each, while the US Center for Disease Control & Prevention has also procured locally oxygen cylinders and will deliver them to local hospitals, besides support of US experts.

The USAID will also send 15 million N95 masks for patients and healthcare professionals, divert its own order of AstraZeneca vaccines manufacturing supplies to India to enable manufacture over 20 million doses of Covid-19 jabs here, and an initial tranche of 20,000 Remdesivir doses for patients here.

The US has already worked closely with India across 20 states and Union Territories partnering with more than 1,000 healthcare facilities, training 14,000-plus people at different levels, including laboratory, surveillance and epidemiology, emergency preparedness, bioinformatics, infection prevention and control, vaccine rollout and risk communication, besides keeping over 2,13,000 frontline workers safety.

In the past 20 years, the US foreign assistance to India has exceeded $2.80 billion, including more than 1.40 billion for healthcare alone through various agencies like USAID, HHS, CDC, FDA and NIH, aimed at the wellbeing of the most vulnerable communities in the country.

Tibetan spiritual leader the Dalai Lama on Tuesday announced to contribute to the PM-Cares Fund as a token of solidarity with fellow Indian brothers and sisters.

“I have been following the continuing challenge that the Covid-19 pandemic has been posing across the world, including in India, with concern,” the Dalai Lama said in a statement.

“At this critical time, during this alarming Covid-19 surge, I have asked the Dalai Lama Trust to make a donation to the PM-CARES Fund as a token of our solidarity with fellow Indian brothers and sisters.

“May I take this opportunity to express my deep appreciation for all the efforts that are being made to tackle this devastating pandemic, especially by those courageously working on the frontline. I pray that the pandemic threat will end soon,” the elderly Buddhist monk added.

The Tibetan administration in exile is based in the north Indian hill town of Dharamsala in Himachal Pradesh.

Amid the surge in the Covid-19 pandemic, the Central Tibetan Administration (CTA) has appealed to Tibetan communities worldwide to contribute to India’s ongoing relief measures to the Prime Minister’s Citizen Assistance and Relief in Emergency Situations Fund (PM CARES Fund).

The CTA has announced that its officials and staff will contribute its per day salary to the PM CARES Fund to aid the government’s efforts in fighting the pandemic.

Meanwhile, individuals, organizations and institutions are urged to build on the effort and contribute to the PM CARES through the respective Settlement Offices based in India and offices of Tibet abroad latest by May 7.

The Tibetan exile administration is based in Dharamsala, Himachal Pradesh.

Expressing gratitude to India for the support provided by the nation to small and vulnerable member countries earlier in the Covid-19 pandemic, Commonwealth Secretary-General Patricia Scotland on Thursday assured medical help the government and its people facing “heavy burden” with the latest wave of infection.

“On behalf of the whole Commonwealth family, I want to express our deep concern and solidarity with the people and the government of India as your national agencies mobilise to contain the COVID-19 pandemic and as the latest wave of infection continues to spread so distressingly in your country,” Scotland said in a statement to IANS.

“We are immensely grateful for the support provided by the government of India to small and vulnerable member countries of the Commonwealth earlier in the COVID-19 pandemic, it was an immensely generous and practical response to this global emergency.

“And as your country so compassionately acted to support others in their time of need your fellow Commonwealth nations and the institutions which serve them would wish to do all we can to reciprocate in that same spirit of mutual support.”

“As a family of nations, we value our brothers and sisters in India and we, along with the wider Indian diaspora, all of whom have family and friends affected, share your anguish at the impact of this devastating and terrible disease and commit to supporting the government and people of India in any way possible,” the Secretary-General added.

India’s tally of coronavirus cases reached 17,997,267 on Wednesday morning. Its Covid-19 tally is the second-highest globally, after that of the US, with Brazil in third. In terms of the death toll, India is fourth in the world, behind the US, Brazil and Mexico.

Countries such as Canada and Mauritius on Wednesday announced their assistance to India to deal with the world’s worst outbreak of the covid-19 pandemic so far, with the daily death toll breaching the 3,000 mark overnight.

About 200 oxygen concentrators from Mauritius arrived in India on Wednesday.

Karina Gould, minister of international development, announced $10 million in funding for humanitarian assistance to the Canadian Red Cross to support the Indian Red Cross Society’s response to the devastating situation unfolding in India, according to a statement from the Canadian high commission in New Delhi.

“Canada’s contribution will support the procurement of essential supplies and medicines, including oxygen cylinders for clinics and ambulances,” the high commission said.

Earlier, South Korea said it would provide India with oxygen concentrators, covid-19 diagnostic kits and other items. Health official Yoon Taeho, who announced aid for India, did not elaborate on the quantities, according to an AP report.

The United Nations is helping India in its uphill battle against Covid-19, said a UN spokesman.

The UN team in India, led by Resident Coordinator Renata Lok-Dessallien, is supporting the authorities’ response to the pandemic by providing equipment and supplies, including to local governments, deputy spokesman for UN Secretary-General Antonio Guterres, Farhan Haq, said on Wednesday.

The World Health Organization (WHO) and the UN Children’s Fund (UNICEF) are procuring equipment and supplies, including 7,000 oxygen concentrators and 500 nasal devices for oxygen supply, as well as oxygen-generating plants, Covid-19 testing machines, and personal protective kits, he said.

The WHO is also helping to set up mobile hospital units and is providing for laboratories. Some 2,600 WHO field officers have been immediately deployed to support health authorities. In the western state of Maharashtra, the second-most populous in India, UNICEF has engaged experts to work on risk governance, he told a daily press briefing in New York, the Xinhua news agency reported on Thursday.

The UN team in India is also continuing its campaign to highlight the three Ws: Wear a mask, Wash your Hands, Watch your distance and stay six feet apart, he added.

India alone accounted for 38 percent of all new Covid-19 cases recorded worldwide in the seven-day period that ended on April 25. India also reported a 93 percent week-on-week increase in the number of coronavirus-related deaths last week. In the past seven days, 15,161 people lost their lives to the virus, the WHO said on Wednesday.