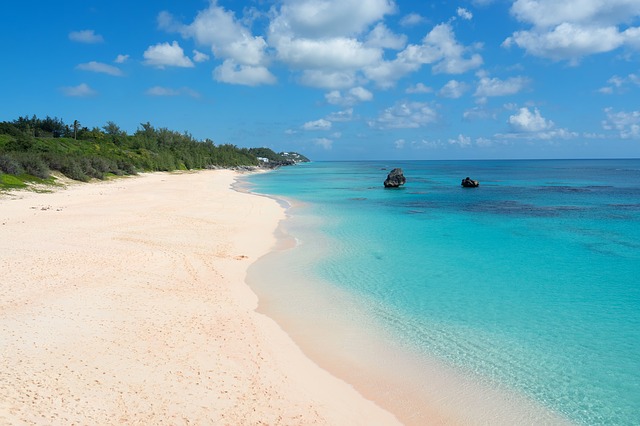 Bathed in the Sargasso Sea’s warm, clean waters, the chain of islands that is Bermuda is surrounded by treacherous reefs that make it one of the world’s top diving addresses. With its stately mansions drowning in rich greenery and bougainvillea and fragrant frangipani, their panoramic white roofs developed to catch rainwater, Bermuda feels like a sophisticated chunk of rural Britain lifted into more temperate climes. But it’s way more diverse than that, with British, African, North American, West Indian, and Portuguese influences adding to the eclectic cultural melange. Despite its tiny size – just under 20 miles by over 2 miles – Bermuda’s art galleries and museums add touches of city sophistication, and its many fortresses attract history buffs. At the same time, its diverse topography makes it perfect for all manner of hiking, water sports, golfing, or just unwinding on a picture-perfect pink-sand shore.

This is the best museum in Bermuda. Taking up the whole of the Dockyard’s 19th-century CE fortifications, it’s split into two central parts. The arched Queen’s Exhibition Hall is an airy gallery that showcases the treasures discovered on 18 key shipwrecks. On the higher grounds, the world’s first cast-iron construction – the Commissioner’s House – features exhibitions on all phases of Bermuda’s history, from slavery to Bermudian participation in World War II. It would be best if you don’t miss the mural.

Bermudians were granted complete access to this 70-acre nature reserve made up of unspoiled beaches, woodland, rocky shores, and salt marsh when the US Navy finally pulled out in 1995 CE. Nature trails run through a mixed forest of remaining Bermuda olivewoods and cedars, mixed with introduced growths of Brazilian allspice and pepper. The seven seashores are tranquil and suitable for snorkeling, and the salt marsh is a lively habitat for kingfishers, herons, and land crabs.

The most notable of Bermuda’s 91 forts was initially established on this rocky promontory in 1614 CE and expanded five times since. A long drawbridge leads inside into an AC (air-conditioned) museum featuring the fort’s dioramas through the centuries and model Crown Jewels. Move into the underground tunnels to discover the gunpowder storage room, armaments room, and shell lift. Costumed mannequins represent living conditions inside the fort. From the barricades, you can also observe the reefs that shipwrecked the medieval Sea Venture.

The hands-on exhibits at this fun and educational place initiate guests into the secrets of the deep. The tacky-but-fun diving capsule simulator takes you to 12,000ft depths, and there’s a captivating display of diving apparatus with a timeline.

Top Things to do in Bermuda

What to eat in Bermuda?

A couple of relatively unique Bermudian dishes are Hoppin’ John, a delicious plate of black-eyed peas, boiled rice, and salted codfish cooked with potatoes, the regular Sunday breakfast. Shark hash was prepared, fish cakes were famous on Fridays, hot cross buns at Easter, and farine pies or cassava at Christmas. With an extensive high-end tourist market, a significant effort has been expended by restaurant and hotel chefs to develop a purportedly ‘traditional Bermudian cuisine.’ However, this has usually meant accommodating other cuisines, from Californian to West Indian, Asian and Indian.

While large lobster and other kinds of seafood are featured on the food menu, almost everything is imported from Canada or the US. If you want local fish, look or ask for “local” as opposed to “fresh.”