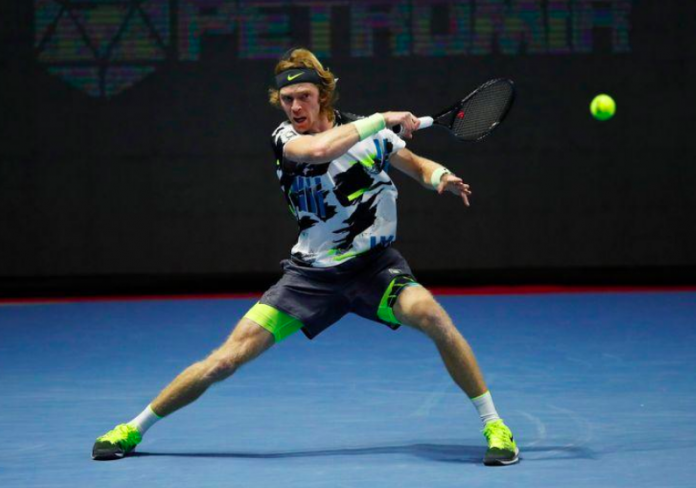 Rafael Nadal was dumped out of the Monte Carlo Masters as Andrey Rublev completed a superb 6-2, 4-6, 6-2 victory in their quarter-final clash.

Nadal went into the meeting with a 73-5 record at the event but Russian Rublev was in inspired form and stunned his Spanish opponent, DPA reported.

The 11-time champion looked set to complete a trademark comeback after taking the second set in 74 minutes. But Rublev held firm in the decider to claim a memorable victory after two hours and 33 minutes.

“I cannot imagine being in the situation of Rafa, knowing that you are the best player on clay and you have that pressure every time,” Rublev said.

“I think, for him it must be incredibly tough every time. I am in shock (with) the way he is playing under this pressure and that is why he is a legend.”

Rublev will face Casper Ruud in the semi-final after he overcame defending champion Fabio Fognini 6-4, 6-3.

Dan Evans followed up his superb victory over Novak Djokovic on Thursday with a slender win over David Goffin to reach his first Masters 1000 semi-final. World number 33 Evans, who had come into the tournament having lost his previous 10 matches on clay, overcame Goffin 5-7, 6-3, 6-4 in two hours and 42 minutes.

“I am proud of how I came back today, especially with what happened in the first set,” he said after the match.

“I felt my concentration wasn’t great and I am really happy with coming through. Yesterday would not have been worth it with a bad performance today.”

Spaniard Fokina did not return for the second set after receiving treatment during the first, which Tsitsipas won 7-5.