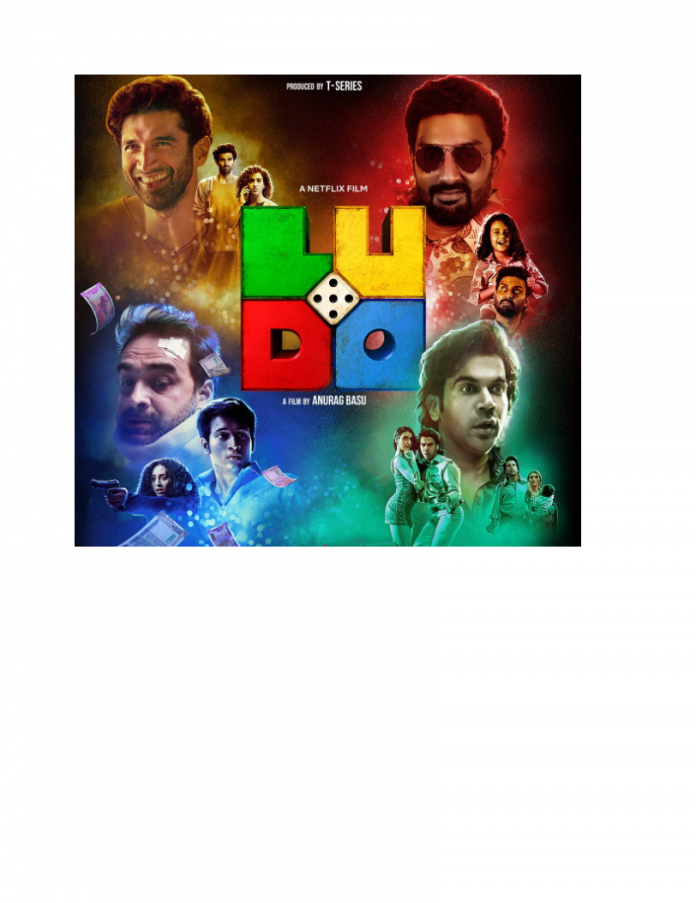 We have known Bollywood Director Anurag Basu to bring every story alive. Bollywood has a reputation of showing the best stories with drama and an in-depth message. This movie is proof of it. We like to watch movies that attract our consciousness. Bollywood makes so many movies every year that have been stealing hearts all around the world.

There are several stories entwined in Ludo and as the movie moves along, the stories meet eventually. The stories are somehow connected to each other. The shocking part is that we don’t even get confused about what’s happening in the movie. It flows like a river despite different stories within the movie and beautifully all connect in the end. The centre stage of the movie is taken by the feared criminal, Sattu Bhaiya.

The story starts off with the gruesome murder by the goon, Sattu Bhaiya. Then, the parallel stories come along and get linked to him. Every story has a different situation but all of them are somehow linked to Sattu Bhaiya. Akash and Ahana get petrified when their intimate videos get leaked online, and now they are finding ways to get it deleted. But the irony is, Ahana is about to get married to someone else is petrified about the video destroying her marriage.

In a parallel universe, Bittu is an ex-convict who gets released from jail. When he visits his wife and kids after six years he sees they have moved on. In the third story, Pinky, a devoted wife finds out that her husband has been convicted of a murder (which was committed by ….), so to get help she runs to her childhood love Alok aka Alu. In the fourth story, an unlucky salesman, Rahul and a bullied nurse, Sheeja are doing their daily chores only to find out their paths will cross and their lives will take drastic turns.

The movie ‘Ludo’ begins with an interesting foundation. The entire plot and flow bring intrigue to the table. There is a heartwarming track in the beginning which sets the whole mood, with a tub of popcorn of course. Eventually the characters get introduced, meet towards the end and eventually the story flows from one riverine to the other.

However, as the plots progress, things do get stuffy because everything is happening at once.

The narrator of the film is the Director himself, Anurag Basu, who is stitching the whole story together whilst giving us a chance to ponder on moral values, thereby reflecting on the conundrum of sins and virtues.

The movie also offers a dark comedy with sweet romance and different characters in between the stories. The cast of the movie has delivered a brilliant performance and the sound track has been stealing hearts all over India.

The cast includes Pankaj Tripathi, an absolute pro at playing the role of a desi criminal. Rajkummar Rao’s adaptation and fandom of Mithun da is all we needed to bring comedy to the screen. Abhishek Bachchan makes an impact as Bittu. Fatima Sana Shaikh passively triggering a happy Pinky comes as a surprise. Sanya Malhotra and Aditya Roy Kapoor hold a lovely chemistry. Rohit Saraf of Dear Zindagi fame comes to life with minimal dialogues but thought-provoking actions. Pearle Maney too leaves quite the lasting impression.

I’ll rate this film 3/5 for the moments that sparked joy in my heart. The story is strong but could be a tad bit confusing for a portion of the audience, especially towards the end. But the movie builds up really well and the climax is stimulating too. I like that the film stresses on a moral that’s applicable to the world today, “don’t judge anyone by their deeds“.