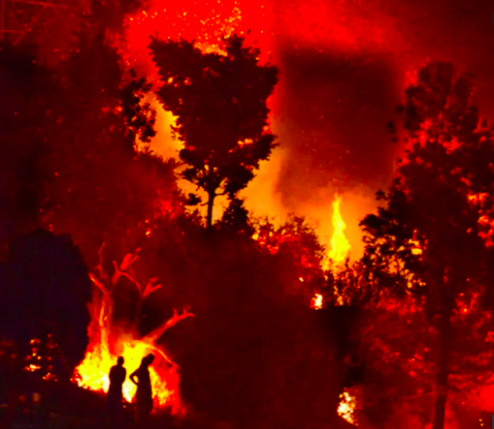 The Indian Air Force (IAF) would deploy two helicopters to douse the forest fire in Mizoram even as the state’s fighters and disaster management personnel are battling the blaze in Lunglei district and its adjoining areas, officials said on Sunday.

Chief Minister Zoramthanga on Sunday sought help from the IAF as well as the locals in dousing the major forest inferno in the mountainous district, which shares borders with Myanmar and Bangladesh.

Officials here said that Zoramthanga has earlier asked the Chief Secretary Lalnunmawia Chuaungo to talk to the IAF authority to urgently deploy helicopters to douse the forest fire which has been rapidly spreading in the adjoining localities and small towns of Lunglei and the adjacent district in southern Mizoram.

An official statement said that the fire was initially concentrated in uninhabited forest areas surrounding the Lunglei town on Saturday and on Sunday have spread to more than 10 village council areas adjoining the town.

“Dry vegetation due to drought conditions, coupled with strong winds, has made the mission extremely challenging, and the unfriendly terrain of the area also poses a very serious risk and hindrance for the firefighters,” the statement said.Lunglei district’s Deputy Commissioner Kulothungan said that the state’s fire fighters and disaster management personnel accompanied by the locals are doing their best but the wind is further increasing the fire spread to newer areas.”There is no casualty in the fire so far. We are unable to assess the gravity and volume of the damages due to the fire right now as we are busy in dousing the inferno,” Deputy Commissioner said.

The Lunglei district blaze is the fifth major forest fire in the four northeastern states – Nagaland, Arunachal Pradesh, Manipur and Mizoram – since January this year.

The forest fire caused huge damage to the flora and fauna, forest and environment of the Dzukou Valley, which is one of the 10 most beautiful places in the mountainous northeast India.

The Dzukou valley, situated at an altitude of 2,452 metres above the sea level and 30 km from Nagaland capital Kohima, is also a sanctuary for the endangered Blyth’s tragopan – Nagaland’s state bird – and other species of birds and animals.