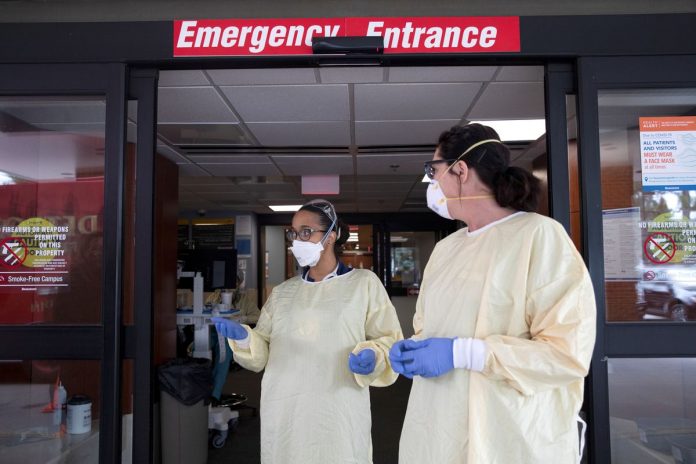 When Michigan’s St. Clair County held a walk-in COV1D-19 vaccination clinic last week with 1,600 shots at the ready, only about 800 people signed up in advance. Walk-in traffic was slow. A quarter of the available shots went unused, says Jennifer Michaluk, a county health department official.

St. Clair County, which sits on the Canadian border just northeast of Detroit, is a COVID hotbed. Earlier in the month, 30% of virus tests were coming back positive. Michigan has seen the biggest case spike of any state in recent weeks.

Despite the surge, health officials for more than 20 counties in Michigan told Reuters eligible residents are not showing up for their shots, particularly in rural areas that supported Republican Donald Trump in November’s election, increasingly inhibiting their ability to contain the outbreak.

In the early stages of the vaccination campaign, officials said, people were knocking down the doors. But this month, even as the state opened up the shots to all adults, counties across Michigan like St. Clair County noticed the once-crushing demand was beginning to lessen.

“For a 500-appointment clinic, we are getting 50 to 60% of the appointments filled. A month ago, we could fill a clinic in 15 minutes flat,” said Danielle Persky, deputy health officer for Cass and Van Buren counties, which sit near Lake Michigan in the southwestern part of the state and strongly supported Trump in November.

Her department has taken to Facebook to urge local residents to “Stop on by for a vaccine!”

Trump’s strongest base of support – white voters without a college degree – has traditionally been distrustful of large government programs such as the vaccination rollout. Local health officials said they have also had to combat a torrent of misinformation on social media about the virus and the efficacy of the vaccines.

While there are areas such as Oakland County outside of Detroit where demand still outstrips supply, other regions in the state say that just about everyone who wants a shot can get one now. Experts worry that momentum is slowing, both in Michigan and elsewhere.

“We’re starting to hit that wall in some areas, where most of the people who were anxious to be vaccinated have gotten their vaccines, and the rest are either still considering or have decided against it,” said Tara Smith, an epidemiologist at Kent State University in neighboring Ohio.

U.S. health officials such as Anthony Fauci have estimated that 70% to 80% of the country needs to be vaccinated before the virus is contained and most restrictions eased. About a quarter of the population has been immunized in Michigan – on par with the national average but less than neighboring Wisconsin, where nearly a third have been.

“I don’t know if we’ll get to 60% or even 50% of the population [in the state] vaccinated,” said Mark Hackel, the county executive of populous Macomb County outside Detroit.

Many of the Michigan counties that most supported Trump are making slower progress at vaccinating the elderly, who have been eligible for shots since early in the year and who remain more at-risk from the virus. Trump won more than 60% of November’s vote in 49 Michigan counties. As of Tuesday, 60% of seniors in those counties were fully vaccinated, compared to 66% in the rest of the state.

The 20 counties with the lowest vaccination rates for seniors were all won by Trump in November, a Reuters review of Centers for Disease Control data on county vaccination figures showed.

A new Reuters/Ipsos poll conducted April 12-16 shows deep ambivalence about the vaccine among Republicans nationwide, with 38% saying they “do not want the coronavirus vaccine,” compared to 14% of Democrats and 30% of independent voters. (For a graphic, click https://tmsnrt.rs/2QdUSN7)

Trump spent much of his final year in the White House openly challenging the science behind the virus and U.S. public health experts such as Anthony Fauci. While Trump’s administration drove high-speed development of the vaccines, he was a reluctant advocate for them. He received the shots, in private, in January.

“We remind [people] Trump got vaccinated,” said Mark Hamed, who serves as medical director for eight Michigan counties, all of which voted for Trump with at least 63% of the vote.

The real challenge may lie in those under 65. Hamed said most of the COVID patients he sees in emergency rooms are on average 40 years old, are unvaccinated and have been infected with the U.K. variant of the virus, which experts say is more transmissible.

Michigan Governor Gretchen Whitmer, a Democrat, has pleaded with the federal government to increase the number of vaccines allotted to her state to address the surge in cases but has been rebuffed. Administration officials said shifting distribution was not in line with its public health strategy, and the state needed to “go back to basics” and shut down.

Lynn Sutfin, a spokesperson for the state Department of Health and Human Services, acknowledged that while there are areas of the state where demand for the vaccine has slowed, some residents “still cannot get appointments and remain on waiting lists.” The state is constantly monitoring distribution of vaccine inventory, she said. “We know the way out of this pandemic is the safe and effective COVID-19 vaccine.”

But Marcus Cheatham, health officer for Clinton, Gratiot and Montcalm counties in central Michigan, said it was time for the state – and the country – to shift its focus from logistics of distribution and “pivot to what really matters, which is the large share of the population that won’t accept the vaccine.”

Cheatham and other public health officials say the resistance is largely rooted in fears over the vaccines’ safety, which can be disproved with a robust education campaign in the coming weeks.

“It will be another wretched summer,” he said, “if we can’t get more people to roll up their sleeves.”