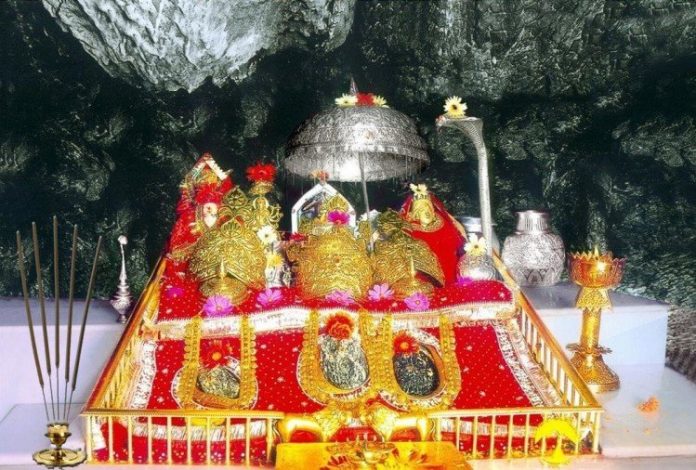 Like most old Shrines, it is impossible to determine when the pilgrimage to the Holy Shrine began. However, a geological study of the Holy Cave has shown its age to be nearly a million years. The mountain Trikuta finds its mention in Rigveda, the oldest of the four Vedas. The practice of worshipping Shakti started in the Puranic period.

The first mention of the Maa is in the Mahabharat. When the armies of Kauravas and Pandavs were arrayed in the battlefield of Kurukshetra, Arjun, the chief warrior of Pandavs, upon the advice of Sri Krishna, meditated upon the Maa Goddess and sought her blessings for victory. This is when Arjun addresses the Mother Goddess as ‘Jambookatak Chityaishu Nityam Sannihitalaye,’ which means ‘you who always dwell in the temple on the slope of the mountain in Jamboo’ ( referring to the present day Jammu).

As per the history narrated on Indic Sculptures, Pandavs were the first to construct the temples at Kol Kandoli and Bhawan in gratitude and reverence for the Mother Goddess.

While different versions of the origin of Shri Mata Vaishno Devi Ji are widespread, there seems to be agreement on the rediscovery of Shrine hundreds of years back by Pandit Shridhar, at whose place Mata had helped organize a Bhandara. When she left amidst the Bhandara to avoid Bhairon Nath, Pandit Shridhar is said to have felt as if he had lost everything in his life. He gave up the intake of food or even water and felt immense grief and closed himself in a room of his house, fervently praying for Vaishnavi to reappear.

It is then that Mata Vaishnavi emerged in his vision and asked him to search for her at the Holy Cave situated in the folds of the Trikuta Mountain. She revealed the way to the Holy Cave and insisted him to break his fast. Pandit Shridhar then went on to find the Holy Cave in the hills. Every time he appeared to lose the way, the vision of his dreams appeared before his eyes, and finally, he reached his destination. Upon entering the Cave, he found a rock form with three heads atop it. At that moment, Supreme Energies of Mata Maha Saraswati, Mata Maha Lakshmi, and Mata Maha Kali appeared in the Holy Cave and introduced him to the three heads (now known as the Holy Pindies) of the rock formations along with various other identification marks in the Holy Cave. Pandit Shridhar then spent his remaining life in the service of Mata at the Holy Cave.

Ancient reference of the visit of a historical figure to the Holy Cave is that of Guru Gobind Singh, who is said to have visited there via Purmandal. The old foot track to the Holy Cave passed through this well-known pilgrimage center.