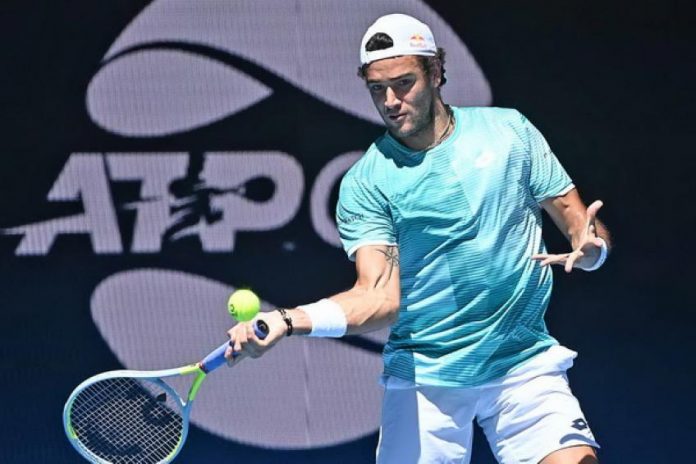 Second seed Matteo Berrettini completed an emphatic return to form with a 6-1, 3-6, 7-6(0) victory over Aslan Karatsev on Sunday to clinch the Serbia Open title.

Playing in his first final since Stuttgart in 2019, Berrettini improved to 4-1 in ATP Tour championship matches after taking down Karatsev. The World No. 10 fired nine aces and broke Karatsev three times during the two-hour, 30-minute battle.

After the victory, Berrettini dedicated the trophy to his family. His parents were among the few in attendance at the Novak Tennis Centre, the first time they’ve got to see their son win a title in person.

“It was something that I really wanted to happen, because my dad came once in Munich when I lost the final. And my mom has never come for a final,” Berrettini told atptour.com.

“So I was like, okay this is the right moment. And I think with a match like this it’s going to stick in our minds forever. It’s something special.”

Berrettini was competing in just his second tournament since the Australian Open after an abdominal strain kept him off the courts. Last week, he bowed out in his opening match at the Rolex Monte-Carlo Masters. But he bounced back in Belgrade to claim his fourth ATP Tour title.

“Today I proved to myself that I can fight and I can digest tough situations,” he said. “I’m able to handle really tough moments. There are moments that all athletes in general have, but I really put myself in the struggle without any fear.”

Dubai champion Karatsev was seeking his second ATP Tour title of the year, and looking to back up his marathon victory over World No. 1 Novak Djokovic in the semi-finals.

After winning one of the longest ATP matches of the year to topple the 18-time Grand Slam champion, Karatsev looked understandably sluggish in the opening exchanges against Berrettini and struggled with the Italian’s heavy pace. The Russian saved 23 break points on Saturday in his victory against Djokovic, but went 0/2 in the first set as Berrettini took control.

But Karatsev found a way back in the second set, taking advantage of a brief dip in form from Berrettini. The Italian struggled to connect with his first serve as Karatsev went after the returns, taking the ball early and putting pressure on Berrettini. Breaking early for a 2-0 lead seemed to galvanise Karatsev, who raised his level to send them into a decider.

With both players fully settled into the contest, there was little to separate Berrettini and Karatsev. The Italian took the first break for a 3-1 lead, but Karatsev pegged him straight back to stay on serve. After fighting off two break points – including a match point at 5-6 – Karatsev seemed ready to pull off another unlikely comeback in Belgrade. But Berrettini reeled off all seven points in the tie-break to take down the Russian and seal the victory.