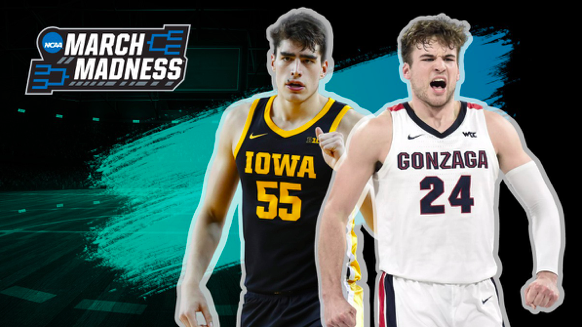 A year ago, we were ready for March Madness, and then the pandemic stopped the world. The NCAA will go through the tournament in 2021. No matter what happens.

The season has been a little strange. There are no fans in the stands, and teams like Duke and North Carolina struggle to get into the tourney. But we are not here to talk about teams, but about the best players. College basketball doesn’t highlight stars unless you are really paying attention.

You won’t find a big man as skilled as Luka Garza easily. Garza was the consensus choice as the national player of the year entering the season, and he hasn’t disappointed.

Garza is strong playing in the low post and moves as smoothly as any big man you have seen. But what makes him unique is he keeps opponents in check with attempts per game from beyond the arc. Garza averages 24.3 points per game in the 2020-21, a top-three mark in the nation. He’s the man to follow during March Madness.

Corey Kispert is why Gonzaga will enter the 2021 March Madness as one of the favorites to win it all.

Kispert averages 19.5 points per game and shoots over 56 percent from the field. He has so many tools in his arsenal that he opens many options for the Bulldogs offensive game. Everything gravitates around him, and if Gonzaga goes far in the tournament as expected, Corey Kispert will be the primary reason.

Jared Butler is your guy if you love an all-around player. He’s one of the best two-way players in the nation.

Baylor is a team loaded with talent, but guard Jared Butler leads the team in points and steals. He’s also the player with the ball in his hands during crunch time. Whenever the Bears need a bucket, they will go to Butler.

Cade Cunningham can go off at any time. He already had games where he scored 40 points against Oklahoma, 25 against West Virginia and Texas, and 29 against Oral Roberts.

Cunningham also averages 6.3 rebounds and 1.5 steals per game. The Cowboys are catching fire at the right time, and Cade Cunningham’s recent performances are the main reason.

The sophomore Drew Timme doesn’t get all the attention at Gonzaga because Corey Kispert exists. But he’s just as good to carry with this team when needed.

Timme averages 18.9 points per game and leads the team with 7.1 rebounds and 0.8 blocks. We can argue he’s the Bulldogs’ most important player because he can do it all on both sides of the floor.

The Wolverines are one of the nation’s best teams, and there is no single reason for their success. However, despite working as a team, center Hunter Dickinson remains the glue of their accomplishments.

Dickinson is a 7-1 freshman averaging 14.4 points per game this season, alongside 7.7 rebounds. He shoots 60% from the field and doesn’t try any three-pointers. Dickinson knows his game and knows what works for the team. He deserves lots of credit for staying in his lane.

Illinois will be a dangerous team in March, and Ayo Dosunmu has a lot to do with it. He got selected to the preseason first-team All American. None of what he has done as a Junior is surprising, and instead, it was expected.

Ayo Dosunmu averages 21.3 points per game while shooting 40% from three-point land. He already has three 30-point games this season, most recently putting 31 points on Nebraska on the road.

Make some room for Charles Bassey during March. The Western Kentucky fans know the ball will be in his hands when the Hilltoppers need a basket.

Bassey scores 17.8 points per game while shooting 61.4% from the floor. But his underrated asset is Charles makes everybody better by putting an effort on both sides. He averages 11.8 rebounds and an unreal 3.1 blocks per game.

Cameron Thomas averages 22.8 points per game and shoots over 40.7 percent from the field. He carries LSU no matter what arena they are playing.

Since January 26, Thomas has scored at least 21 points per game. Against Vanderbilt just days ago, he had a fantastic double-double where he scored 23 points and grabbed ten rebounds.

The Tigers often look like a team that could be better if they give Cameron Thomas some help. But that has nothing to do with the freshman guard. He remains the best player on the team, even though his teammates don’t help him.

Gonzaga is an unfair team. They have three of the nation’s ten best players, and the combination between Corey Kispert and Jalen Suggs is unstoppable. Literally, no one has stopped the Bulldogs in 2021.

Suggs could easily be the Freshman Player of the Year, averaging 13.9 points and 5.5 rebounds per game.

In his young career, Suggs’ best game was against Iowa when he scored 27 points and had seven rebounds against the Hawkeyes.

Who is the No. 1 team in College Basketball Right Now?

With three players inside the top ten, the Gonzaga Bulldogs are the team to follow during the tourney. They look loaded with talent and an experienced coach to make a run. According to Safest Betting Sites, these are the betting odds for the 2021 March Madness Tournament.

But don’t sleep on Michigan, Baylor, and Illinois. Neither is a college basketball powerhouse, but they have played great this season from start to finish.

March Madness is about the brand and the history of the school. Yet, any of the names above could make a fantastic storyline during March. Each of those ten players can take over any game and carry with his team during the madness.

Follow and enjoy these playmakers when the 2021 March Madness starts.