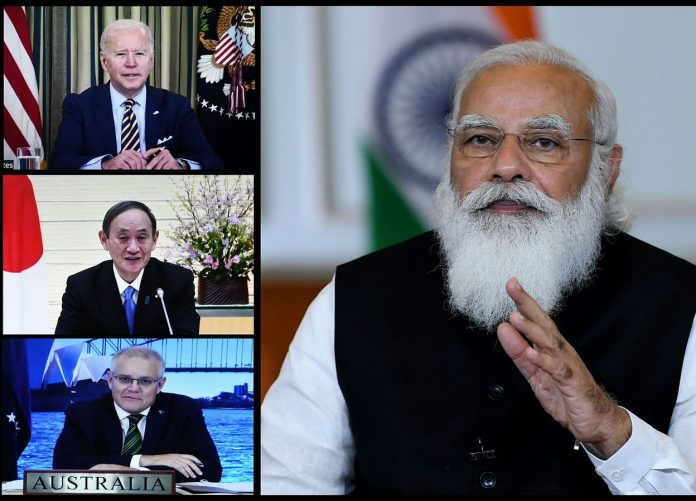 The leaders of the Quad agreed on Friday to cooperate in providing vaccines to the Indo-Pacific region by harnessing their scientific, manufacturing and financial capabilities, charting a new course of close cooperation.

Marking the new, enhanced phase of cooperation, Prime Minister Narendra Modi said at the start of the quadrilateral virtual summit involving the US, India, Japan and Australia that “Quad has come of age”.

A joint statement issued after the virtual summit said, “Building on the progress our countries have achieved on health security, we will join forces to expand safe, affordable and effective vaccine production and equitable access, to speed economic recovery and benefit global health.”

“We will combine our nations’ medical, scientific, financing, manufacturing and delivery and development capabilities and establish a vaccine expert working group to implement our path-breaking commitment to safe and effective vaccine distribution,” said the statement issued after the meeting also involving Prime Ministers Scott Morrison of Australia and Yoshihide Suga of Japan, and US President Joe Biden.

US Vice President Kamala Harris was also present at the meeting.

Prime Minister Narendra Modi said on Friday that the quadrilateral grouping of the US, India, Japan and Australia has “come of age” as he attended the first Quad leaders’ summit virtually.

The grouping is being seen as a united front to counter China’s imperialistic aggression and expansion through trade and military occupation.

Modi started his speech by declaring, “It is good to be among friends.” The four countries, he said, “are united by our democratic values and our commitment to a free, open and inclusive Indo-Pacific.”

The agenda of the summit — covering areas like vaccines, climate change and emerging technologies — makes the Quad a force for global good, he said.

Describing Quad as a positive vision, the Prime Minister said that it is an extension of India’s ancient philosophy of ‘Vasudhaiva Kutumbakam’, which regards the world as one family. “We will work together closer than ever before for advancing our shared values and promoting a secure, stable and prosperous Indo-Pacific,” Modi said.

Quad, he added, “is an important pillar of stability in the region”.

Modi’s statement was welcomed by a lot of India watchers in the US. Former US diplomat and Harvard academic Nicholas Burns praised the move, tweeting, “Today’s first-ever Quad leaders meeting – of the US, India, Japan and Australia – is a big deal. Led by the President of the United States Joe Biden, these four can lead on vaccine distribution, strengthen democracies in the region and limit China’s assertiveness.”

There are reports that India will produce Johnson & Johnson’s single-dose Covid vaccine shot as part of the first Quad initiative. The project will be financed by Japan and the US, while Australia will use its logistics capability to ship the vaccines to Southeast Asia and Pacific countries.