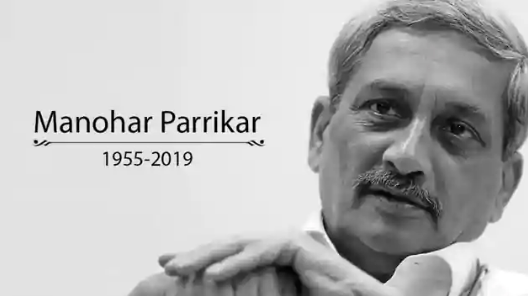 Former Chief Minister late Manohar Parrikar was like an Abhimanyu trapped in the battlefield of politics, according to the former Defence Minister’s biographer Mangala Khadilkar, whose book ‘Ek Manohar Katha’ in Marathi was unveiled in Panaji in the presence of top BJP leaders on the occasion of the departed politician’s second death anniversary.

Khadilkar, who has authored biographies of music stalwarts like Suman Kalyanpur and Pandit Prabhakar Karekar, also said that with his common man image and his modest appearance, Parrikar was unique among the lot of politicians India has produced over the years.

Her preparation for the biography, Khadilkar said, started in 2006, when Parrikar was setting assembly proceedings ablaze from the Opposition benches after having been dethroned from power two years prior. She, however, said that the book could not be completed sooner, because of Parrikar’s subsequent rise in politics both in Goa and at the Centre.

“In 2006, I was observing his remarkable role as an opposition leader (in Goa). I have had the opportunity to engage with a lot of politicians in the country, but I found something very different about Parrikar,” she said.

“I wanted to know more about him. I told him that I want to write a book about him. He asked me, ‘how soon do you want to do it’. I told him, I could wait for years for it,” she recalls her interaction with Parrikar, who has served as Goa’s Chief Minister on four separate occasions.

Over the next few years, she interviewed Parrikar on four to five occasions and watched Parrikar’s meteoric rise in state and national politics through news reportage, the internet and TV clips.

“I was watching him surge ahead. Although I had not written the book then, a writer never really winds up a project. Bhai (Parrikar was affectionately referred to as ‘Bhai’ in Goa) was like an Abhimanyu trapped in the battlefield of politics. But his honesty and his ‘nation first’ belief and his ability to envision his state and his country decades ahead, was also something which was evident,” she said.

Khadilkar also said that the pause in her biography-writing project emerged because of Parrikar’s subsequent rise in politics; first his re-appointment as Chief Minister in 2012 and then his elevation to Prime Minister Narendra Modi’s cabinet as Defence Minister in 2014.

“I did not want to trouble Parrikar with a phone call, because I was watching his political trajectory rise phenomenally. But I knew that it would not be possible to complete those conversations with him, when cancer gripped him,” she said. Parrikar died on MarchA17, 2019 from pancreatic cancer, which he had been diagnosed with a year earlier.

Khadilkar said that Parrikar’s political journey, the nature of his relationship family, his friends, foes, business partners, were all part of the biography, which also summed up his relationship with the common folk of Goa.

“Even if I sat in a taxi (in Goa), the driver would explain Parrikar’s toil in building this bridge (the landmark Atal Setu bridge) after staying up through nights. People would walk up to me and tell me randomly that Parrikar loved to eat lady-fish. And they did not even know I was writing about Parrikar,” Khadilkar said.

What Book Genre Should You Read This Month?