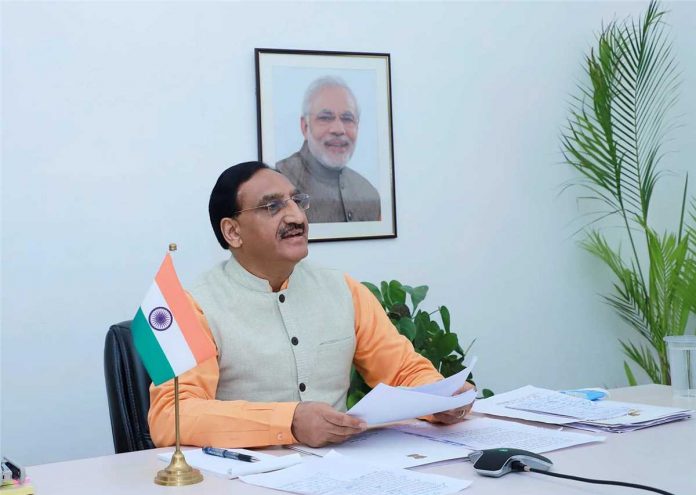 Addressing the valedictory session of the three-day ‘Sarthak Education 2021’ event held in Bhopal, Nishank said that the Centre has made a provision of Rs. 50 thousand crore through the National Research Foundation to take the country forward in the disciplines of research, innovation and patents.

“The new National Education Policy will definitely establish India as a superpower of knowledge,” he declared.

The conference and expo which brought together educationists, teachers and experts from across the country, concluded with the objective of implementing the National Education Policy and establishing a sense of Indian-ness in our education system.

Speaking on the occasion after a three-day brainstorm Mukul Kanitkar, national general secretary of the Bharatiya Shikshan Mandal, presented the action framework. “We want to see institutions like our IITs become gurukuls,”said Kanitkar.

Addressing the valedictory session, Madhya Pradesh’s Sports, Youth Welfare and Technical Education Minister Yashodhara Raje Scindia said that there is no dearth of human resources in the society, the shortfall is only in giving it the right direction. “The experience and guidance of academics can bring about practical changes in the education system,” she added.

State Science and Technology Minister Om Prakash Saklecha said that many countries have made unprecedented progress by adopting India’s model, but we had unfortunately gone back to the British system.

Madhya Pradesh’s Minister for School Education Inder Singh Parmar said that the work that should have been done by the government is being done by the Bharatiya Shikshan Mandal.

In a video message on the theme ‘Education, culture and Sanskars’, Union Culture Minister Prahlad Patel said that education is not confined just to mathematics and science, it is also linked to morality and conduct.

Madhya Pradesh’s Culture Minister Usha Thakur said that the National Education Policy will take India to the auspicious title of being considered as the Jagatguru (world’s teacher).